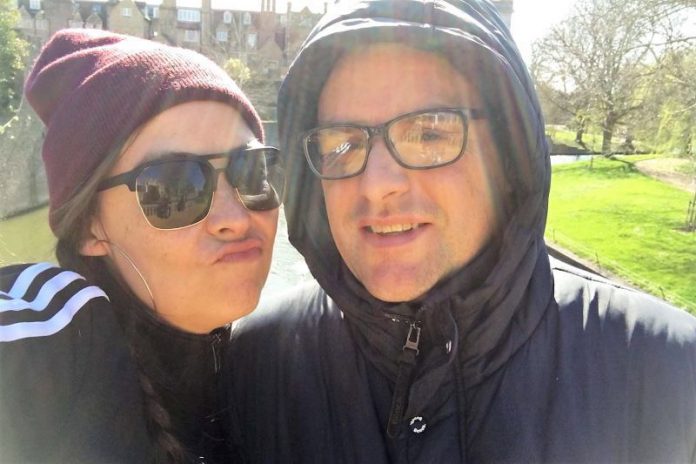 Emily Waszak has been publicly critical of Ireland’s Health Service Executive (HSE) and its handling of her husband Aonghus Cheevers’ death in April.

Ireland’s health service, the HSE, is investigating how a Covid-19 tracer rang 43-year-old Co Donegal man Aonghus Cheevers’ phone three weeks after he died to ask about his close contacts.

It happened last April, but the details were only released this week by Cheevers’ widow, American woman Emily Waszak, as rapidly-rising incidences of the disease in Ireland are prompting major concern.

Waszak, 41, told The Times that a Covid-19 test was carried out on her husband after he died suddenly in April.

She said she has never been officially told that he had the virus.

Cheevers, who taught at Dublin City University, had a number of underlying conditions, including diabetes. He also had stents in his heart and had had a heart attack.

Waszak said that at the beginning of March, the couple quarantined themselves and weren’t seeing anybody.  On April 6, she found her husband dead in the kitchen.

13 years with him. 3 months without him. pic.twitter.com/DGfOWGVJNX

She had wondered whether her husband’s death was related to the disease, but assumed not because his death was sudden and he did not have any of the main symptoms, although they both had a cold a few weeks prior to his death

She received a call from the coroner’s office to tell her that there could not be an open casket at the funeral because her husband had been categorized as likely to have caught the virus. She was unable to attend the funeral because she was considered a close contact.

Waszak said, however, that she had never officially been told by the HSE that her husband had Covid-19.

But on April 26, three weeks after he died, contact tracers rang Cheevers’ phone. She answered and was told that they wanted to talk to her husband about his recent positive test to track his close contacts.

Waszak told The Times, “I said ‘well that is going to be impossible because he is dead. And that Covid test that he tested positive for was done in the morgue.’”

She added that nobody has called her since and she has not received a death certificate or an official cause of death.

On October 7, Waszak said in a tweet that her “dead husband just received a medical card in the post.”

She added: “I have no confidence in the government or @HSELive to get us through the pandemic.”

My dead husband just received a medical card in the post. A month after he died he got a call from HSE contact tracing because he tested positive for Covid. This test was done in the morgue. I have no confidence in the government or @HSELive to get us through this pandemic.

A spokesman for the HSE told the paper, “While we cannot discuss someone’s Covid-19 test results, as these are private and confidential, we can say that we are aware of this case and an investigation is underway to examine the circumstances around this matter.”