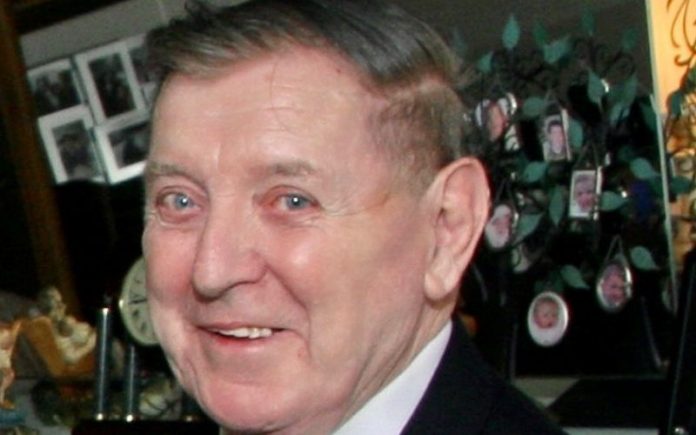 It’s amazing how far WILLIAM B. FINN managed to stretch his life savings of $200 when he arrived in New York from County Galway, Ireland in 1947. Years later, the father of 12 wrote of how proud he was to have achieved his American dream.

While this may sound like I am full of blarney or have kissed that famous stone once too often, I assure you that every word of my story is true. I may also have led you to believe that I was a person who was blessed with financial riches, and this couldn’t be further from the truth.

I was born in 1922 in Athenry, Co. Galway, a town made famous not by me but by its fields and a song written about them. In my years growing up in Galway, those famous fields meant only one thing to me – work. My parents and seven brothers and two sisters shared the farm work, not always evenly. Sharing was something we learned brutally early in a two-bedroom, thatched cottage that did not boast electricity or running water.

We grew all our own vegetables and raised livestock that served as meals and trade. Any excess was shared with neighbors less fortunate or less able than we were.

As I milked cows, fed pigs, sheared sheep and cut the bog for fuel, I thought about one thing – freedom. I dreamed of freedom from poverty, from cold, from fanning and freedom from dirt under my fingernails. To me the thought of freedom and opportunity meant one thing – America. I think I dreamed about America from the day I was born and when I was 25 years old, I was on my way.

I was well prepared for the eight-day ocean trip on a massively crowded freighter called the Ernie Pyle that brought me to America. Many got ill during the journey due to the overcrowded, unhealthy conditions. It never occurred to me that this discomfort was any less or more than what I was used to; my heart was waiting for the sight of America.

immediately saw a store sign that read “Shirts 25 cents and suits $1.” I dreamed of closets of the finest clothes until I learned what “dry cleaning” meant.

It seemed like a heartbeat when 10 years later I was married with two sons and my wife was expecting our first daughter. I had dreams for my family. I had dreams of a good life, a house in a good neighborhood and an education.

I dreamed that education was the key to a good life for my children, a life that would never see dirt under their fingernails. I was working my way to better, more responsible positions with the railroad, while I also worked two and sometimes three part time jobs to make ends meet.

One of those part-time jobs was as a chauffeur and personal assistant to a wealthy socialite named Duffy. Mr. Duffy, the CEO of a large corporation, treated me with dignity and respect. He encouraged me to buy a house. When I explained that it was my dream to own a house but I feared I would never be able to afford one, he told me to find one.

“Find a house and come and see me. I will take care of you the way you take care of me,” he said. Filled with the promise of a new life, I found a two-family house in White Plains, New York. This house was offered for $20,000. When the seller agreed to sell it for $15,500, I gave him my life savings of $200 as a down payment. I told Mr. Duffy that I had found a home for my family.

I remembered that when my son Billy was born on January 1, a local bank had offered a prize for the first baby born in the New Year and my son had won. I arranged to go into work a little late and then made an appointment to see that bank manager. When I met him, I apologized for taking so long to thank him for the prize of a $25 bond won by my son and explained that I was usually working one of my three jobs during banking hours.

On my first day off, I wanted to make a point to thank him in person and tell him about my family. When I left, I had a check for the balance of the house price in my pocket and some extra for furniture.

At the house closing, all fees were paid by bank checks and my original $200 deposit was returned to me as cash. Shortly after moving into our new house, Mr. Duffy asked me to accompany him on a six-week business trip through Europe. I was his assistant, his helper and his driver.

He provided a new wardrobe, took me to the finest restaurants and all of Europe’s finest museums, monuments and attractions that I had only ever seen in books. Everywhere we went and even when we were meeting prominent business and government leaders, he introduced me as his business colleague, Mr. Finn.

I believe that $200 was the building block for my life, the foundation for my house and my family. I have moved into a bigger house since that first house and have had nine more children. I am still not blessed with financial riches, but I have 12 college-educated children who have never lived without running water or electricity.

They have never had dirt under their fingernails, and to me that is riches far beyond my wildest dreams.

*William B. Finn sadly died several years ago. May he rest in peace.