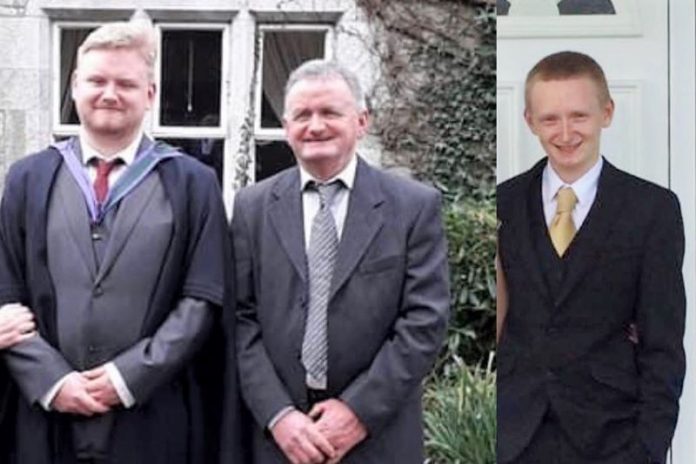 The funeral arrangements for Tadg O’Sullivan, 59, and his two sons, Mark, 26, and Diarmuid, 23, will be held this week in Castlemagner and Kanturk in Co Cork.

The three men were found dead in a suspected murder-suicide at their homestead in Assolas, outside of Kanturk in Co Cork, on Monday, October 26.

Tadg and Diarmuid’s funeral will be held at St. Mary’s Church in Castlemagner, Co Cork with burial to follow afterward at St. Brigid’s Cemetery, also in Castlemagner. The service will be private to family members.

For Tadg and Diarmuid’s funeral, the family has requested no flowers. Instead, the family is directing donations to be offered to The Cliona Ring Foundation, a Limerick-based charity that provides financial assistance directly to parents of children with life-limiting or chronic complex care needs across Ireland to help with the non-medical expenses related to caring for their child.

Mark O’Sullivan’s funeral, also being hosted private to the family, will be live-streamed from the Church of the Immaculate Conception in Kanturk, Co Cork on Saturday, October 31.

Family flowers only have been requested for Mark’s funeral. Donations are being directed to the Jack and Jill Foundation, which provides in-home nursing care and respite support for children up to the age of five, with a range of neurodevelopmental issues including brain injury, genetic diagnosis, and severe cerebral palsy.

On Monday, October 26, gardai were alerted to a “firearms incident” in the home at about 6:30. Gardai promptly responded to the scene and found Mark dead in a bedroom of the house after 1 pm, and soon thereafter located Tadg and Diarmuid in a field nearby to the house.

While gardai are not looking for anyone else involved in the tragic incident, they are appealing to the public for any information relating to the deaths of the three men.

The postmortem examinations all on three men have been completed, but gardai have not released the findings as their investigation continues.

The Irish Times reports, however, that it appears Mark “suffered a number of gunshot wounds when he was shot at by one or possibly two attackers from the doorway into his bedroom” while Tadg and Diarmuid “were found dead with single gunshot wounds to the head.”

On Wednesday, reports emerged that an “apparent suicide note” that “suggested that both Diarmuid and his father had been planning to shoot Mark over a grievance that they had regarding a proposed will dividing up the family’s 115-acre farm” had been found on Diarmuid’s body after the tragedy.