Rachel Kyte holds a motivational keynote address to the audience of the Connect4Climate Be The Movement workshop at the University of Warsaw in parallel to COP19.

“Yes, one person can make a difference, absolutely….

… The greatest win-win is agriculture but we’re not even talking about agriculture….

In climate change most things are a trade off. Agriculture is a win-win-win and we’re not even talking about it.

…Then you talked about solutions and the problem that it’s still perceived as a development versus climate debate. I’m more optimistic. It was the case, in the World Bank we’re a development financial institution. For years it was thought we should not be talking about climate change because we are a development organization, but increasingly we have understood and we are not alone that we cannot eradicate extreme poverty, extreme poverty, measured by an income of $1.25cents a day, unless we grapple climate change….

…What’s being discussed over at the convention is loss and damages and who’s going to pay for it. What we have been doing is bringing to the conversation evidence that you can reduce the cost of loss and the cost of damage by investing in resilience….

We need to invest in resilience today. … For every dollar invested in early warning, you can save up to $35 in the cost of reconstruction.

…Making development resilient, raising the road up so it will be above the flood line, building schools so they don’t wash away, putting a water treatment plant somewhere other than a flood plain is going to cost about 25% more. We estimate that every year a trillion dollars could be invested in infrastructure. That’s the gap, the infrastructure gap. …

… The costs of mitigation are also very expensive. And it will be us and you who are going to pay for this… every day we do not price what is bad we are simply storing up trouble for ourselves financially down the line.

… The sooner we act now, the better we’ll be off financially in the long run…

This is about building a movement, you are the movement.

As you said at the very beginning every one person can make a difference. If you look at the example of the women’s movement, the gay rights movement, of the movements that have transformed within a generation not just what is happening in the world, but the way in which young people think about what their lives might be then every single person has made a difference….

If you want to make change you’re going to have to take the brave fork in the road. That’s your challenge.

Thank you very much.” 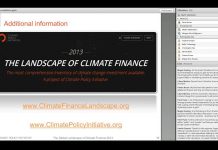