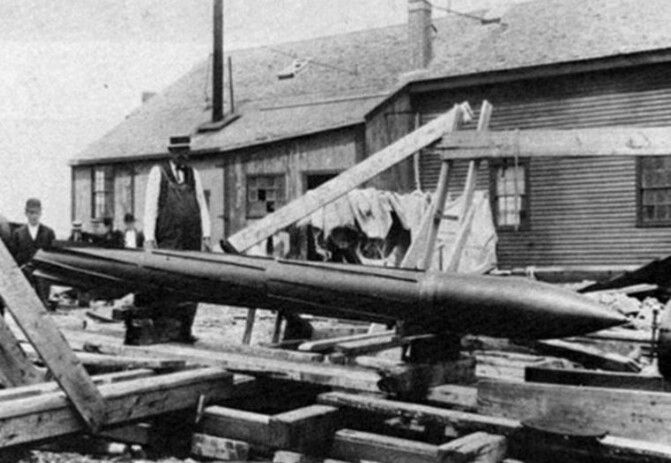 In 1896, Dundalk man Patrick Cunningham put a bang in the closing stages of the US Presidential election campaign.

On October 31st, an election rally took place for Republican candidate William McKinley in the Massachusetts town of New Bedford. It was just four days away from polling day and the Republicans cast their net out across the old whaling town to catch votes.

The Republican rally saw a festive atmosphere in the town on that Halloween night but, Louth man Patrick Cunningham who had made New Bedford his home was not pleased with it. He was a supporter of Democrat candidate William Jennings Bryan so he decided to disrupt the Republican rally by sending a rocket down Main Street!

Patrick Cunningham was born in Dundalk, Co Louth on the 4th of May 1844. At the age of 9, he went with his family on an emmigrant ship to America. His father passed on his cobbler skills to him but, at the age of 20, Cunningham joined the Union Navy during the American Civil War. During his brief stint in the Navy Cunngiham developed an interest in weaponry, especially explosives.

In the summer of 1865 Cunningham jumped from the USS North Caroline and swam to desertion. The charge of desertion was later removed from his service records in 1892.

After a dozen years rambling around the US he finally settled in New Bedford where he returned to his cobbler trade and set up a shoe business. He became friends with a fellow cobbler and Irish American Bernard Cogan. Apart from shoes, the two men also shared an interest in engineering explosives.

In 1877, Cunningham and Cogan invented a heavy but effective whaling gun. This set Cunningham up to patent larger weapons of destruction. In 1892, “Wild Cunningham,” as he became locally known, invented a 17-foot long torpedo. He approached the US Navy with this weapon but they rejected it as it was mechanically inaccurate.

By the time of the 1896 Presidential Election, Cunnigham had become one of New Bedford’s most well know, albeit eccentric, resident. His shoemaking business was thriving and the weaponry that he invented in a small workshop near the docks brought him some fame and fortune.

The Republican rally that rolled into New Bedford on Halloween night 1896 greatly annoyed Cunningham. With bunting, flags, and marching bands there was also a large supply of alcohol flowing freely. Even though Cunningham scoffed at the Republican rally, he did not scoff at the free booze and he availed of it in large quantities! When the Republicans set off fireworks, Cunningham set off for his workshop and decided to release a bigger bang!

Cunningham loaded his “flying devil” torpedo on a wagon and sat on top of it. He steered it towards Main Street but his son managed to pull his father off it, but not before Cunningham struck a match to it and the rocket went screaming down the street!

The “flying devil” bounced from building to building before hitting a tree and landing in a butcher’s shop where it exploded. Several businesses were damaged, Main Street was torn up, and 5 houses were decimated. Amazingly no one was killed! The most serious injury occurred when a gentleman’s handlebar mustache was scorched by the torpedo that flew last him.

Cunningham’s candidate William Jennings Bryan lost to William McKinley in the election four days later. To add to his woes, Cunningham was arrested and fined for his Halloween night antics. It did not deter his thirst for torpedos and he continued to patent the weapons for years after the New Bedford incident.

“Wild Cunningham” retired in the early 1900s and died on the 23rd of May 1921 in New Bedford, the town he almost blew up out of political frustration 25 years previously!