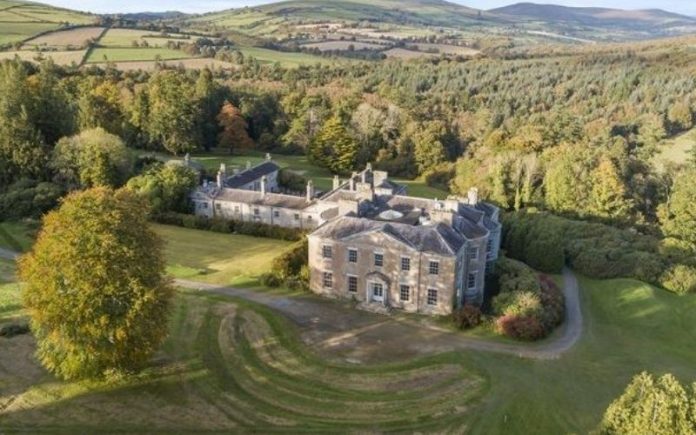 One of the largest homes ever built in Ireland is on the market for less than €1 million.

Coollattin House in Shillelagh, County Wicklow, is one of the finest country houses on the island of Ireland and is available for a modest asking price of €975,000 ($1.16 million).

The Georgian mansion dates back to 1804 and stretches over 65,000 sq ft, with 24 formal bedrooms and countless more for servants and staff who used to work in the building.

The house, which boasts a link to the Kennedy family through President John F. Kennedy’s sister Kathleen, features a staggering 117 rooms in total and takes an hour and a half to view in its entirety.

There is a catch, however. The house has not been occupied in 25 years and needs expansive replumbing, rewiring, and decorative work before it is fit for purpose.

While this may not be so daunting in a regular house, the sheer magnitude and grandeur of Coollattin House mean that it could take more than €10 million to restore it to its former glory with the help of some modern comforts.

The House is unsurprisingly steeped in history and once stood on 85,000 acres of land – almost one-fifth of the entire county of Wicklow.

Coollattin Park was once owned by the Earls of Fitzwilliam and had thousands of tenants and saw 2,000 emigrate to Canada during the Great Hunger of the 1840s.

In 1948, the Earls of Fitzwilliam still owned the house and a large portion of the grounds through Peter Wentworth-Fitzwilliam, the eighth Earl Fitzwilliam.

Wentworth-Fitzwilliam died in a plane crash in France along with Kathleen Kennedy, the sister of John F. Kennedy.

The pair were involved in an extra-marital affair and their deaths caused a scandal; Kennedy was the widow of the heir of the British Devonshire Estate while the Earl of Fitzwilliam was reportedly trying to divorce his wife at the time of his death.

The Fitzwilliams finally sold the house – along with 3,300 acres of land – following the death of Countess Olive Dorothea FitzWilliam in 1975.

The golf club used the land to expand its course from nine holes to 18 but has had to pay for the house’s maintenance and upkeep over the past 25 years.

The house is on the market today alongside 21 acres of land through DNG McCormack Quinn.

There are plenty of interesting features that set Coollattin House apart from an average house, including a secret door in its library and a 256 ft tunnel that leads from the gigantic kitchens to the stables.

Coollattin House also boasts a 56 ft-long drawing-room that served as a party center.

The house was designed by John Carr and William Dickie – two Yorkshire architects from different eras – and features five separate bays, including an entire nursing wing for the Fitzwilliam children.

Today, it stands largely hidden from public view and has all the makings of a luxury boutique hotel. To find out more, click here.