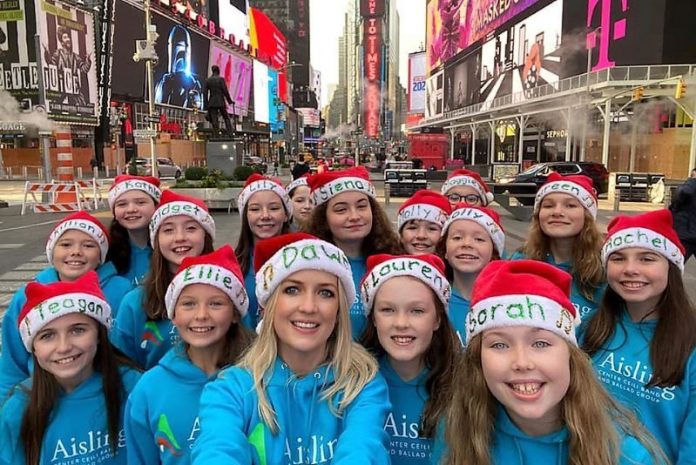 Christmas came early to an enthusiastic and committed group of youngsters and their parents who are members of the  Aisling Center Ballad Group group operating out of the Aisling Irish Center on McLean Avenue in Yonkers.

Under the direction of their Irish music and singing teacher Dawn Ní Dhochartaigh, they worked hard over a number of weeks to be part of a record-setting broadcast of the very popular annual Late Late Toy Show on RTÉ television in Ireland.

Its producers and host Ryan Tubridy were determined that this year’s effort go all out during the pandemic and beyond the restrictions placed on it during lockdowns and social distancing, and to use the virtual format imposed on them to full effect.

And the early returns from last Friday night’s airing topped a number of records for the already well-liked annual affair drawing families young and old around the television screen each year, usually on the first December Friday of the month.  Over 1.5 million watched the show on the night, yielding an incredible 79 percent share of viewers on the telly.

Additionally, it was reported by RTÉ that over 500,000 viewers watched the live stream and on-demand rewind over the weekend, enhanced no doubt by opening and promoting worldwide access to the show for the first time.

Usually a pay-to-view option limits viewership online but given the year that is in it, going virtual and free provided way more publicity and awareness worldwide for one of RTÉ’s already most anticipated shows.

And as a bonus, that expanded audience also donated some $7.5 million to various children’s charities involved in healthcare for the first time also as part of the show which has always included inspiring and heart-warming segments involving children overcoming physical challenges in their lives.

The enduring charm of the annual show throughout the years through its various RTE hosts going back to Gay Byrne, Pat Kenny, and in recent years with Ryan Tubridy has always been to celebrate, through the eyes of children, the Christmas season which captures the fancy of the audience.  The appearances of youngsters with a good story to tell or a special talent to share from all around Ireland was always a winning formula.

Given the worldwide impact of the pandemic, this year an outreach was made to the Irish diaspora to participate in the search process with an open call for audition videos displaying individual or group talent that might be featured on this year’s show.

Ní Dhochartaigh, originally from Co Mayo and resident in Westchester County, has been teaching at the Aisling Irish Center for several years introducing young children to Irish songs and music, boosting their performance skills along with inculcating their Irish cultural heritage through both Irish and English songs.

Working alongside another veteran musician, Frank McCormick, well-known for his work with the popular band Celtic Cross as well as his trojan work for Comhaltas Ceoltoiri Eireann as the North American provincial chair and long-time Mid-Atlantic Fleadh Cheoil organizer, they have worked tirelessly with the area’s youngsters in lessons and preparations for fleadhanna ceoils locally and at the All-Ireland championships.

In the past nine months, like everyone else, their efforts have involved online participation which has done nothing to dim the enthusiasm of neither the teachers nor students.

After experiencing a taste of success at last summer’s open call for submissions for Fleadh 2020 with her group, Ní Dhochartaigh answered the open call for the Late Late Show auditions online along with thousands of others around the world.

With fierce determination and confidence in her Aisling Ceili Ballad group, they kept advancing through three or four rounds which was an achievement in itself, but surpassed when they were informed that they made the final cut and would be included in the show this year.

In fact, they were the only choral group to be chosen and the producers selected them for inclusion in the worldwide roundup production of talent singing the song “Rule the World” appropriately enough.

Adding to the excitement and the logistical challenge was the request to perform and film the song they had to learn and perfect in a week in Times Square.  To do so required a 6 a.m. journey to Times Square during a time when it would be most accessible.

The group responded to the challenge magnificently and even though the eventual appearance was very brief on-air, their accomplishment was recognized on RTE News and additional publicity in Ireland.  Their parental pride was showing and glowing all over Facebook before and after the show aired and no doubt their participation helped RTÉ reach those record numbers in viewers and donations as well.

Three cheers for the display of Christmas cheer and cultural pride for the Aisling Ceili Ballad Group and Ní Dhochartaigh and the greater Woodlawn-Yonkers community at a time when we all need a little Christmas right now while the pandemic is still all around us.

You can watch the Aisling Center Ballad Group’s performance here: