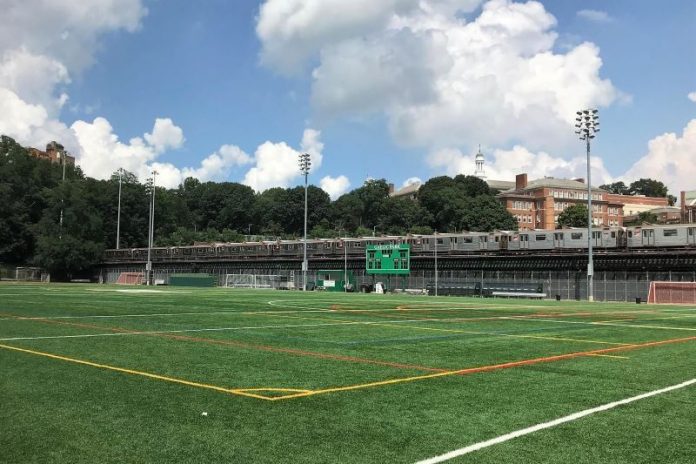 Country music singer Roger Miller had a big hit in the sixties with a song titled “England Swings Like a Pendulum” – well, the New York Junior B football final had all the oscillations of a pendulum at Gaelic Park last weekend.

*Editor’s Note: This column first appeared in the October 21 edition of the Irish Voice newspaper, sister publication to IrishCentral.

Granted this division has the B grade attached to it, but that was certainly a misnomer judging by the quality of the football served by these young American-born players. Though the outcome was in doubt right down to the last quarter, in a way it was the perfect ending to the season for Shannon Gaels as they were the only undefeated football team in Gaelic Park during this truncated season.  The resultant promotion now fittingly enables the Queens club to field two adult teams next season, and thus accommodate the scores of young players who are progressing through the underage programs.

Meanwhile, the early exchanges were tentative as both sides dropped shots short into the hands of the keepers until the Devlin brothers, Patrick and Christian, worked in tandem for the latter to shoot over after the former was fouled. At the other end, Brian McElligott pointed for a foul on Niall McKenna. On the resulting kick-out, the vigilant McKenna intercepted the delivery and sped through the middle but his blistering shot skimmed the crossbar.

It was soon parity as Conor Mathers pointed a free after his brother Tiernan was fouled. Rangers orchestrated a nice three-player movement that ended with a fine point from Joey Grace.

However, Shannon Gaels finished the quarter strongly as Tiernan Mathers blasted over and Ronan Greenan looked set for a goal but his shot was brilliantly deflected out by keeper Mulgrew for a 45. The resultant kick came back off the upright, but Rory McManus pointed the rebound.

Conor Mathers had the last score before the water-break after he latched on to a long delivery from brother Oisin. After rehydration Shannon Gaels put three quick points on the board as they were monopolizing possession in the middle, setting the stage for Conor Mathers, McManus, and Patrick Devlin to hit the target.

Then in a two-minute spell Rangers demonstrated their potency for poaching scores. First Shay McElligott popped over a point, and Dylan Grace added another after he prevented the ensuing kick-out from reaching its intended target.

Then came the major strike, a kind of family affair. Joey Grace off-loaded the ball to brother Dylan who sent a well-placed shot to the corner of the net. The sides were now level but not for long.

Rangers were down a man due to a black card, and the foul set up Christian Devlin to further penalize the infringement.  Then just before the short whistle Oisin Mathers banged in a goal to send his team in leading by 1-9 to 1-5 at the break.

Upon resumption, the Gaels looked poised to cruise further ahead, especially when Christian Devlin landed another point. Rangers had other ideas as the five-point lead quickly evaporated in another two-minute spell.

PJ King ignited the scoring spree with a very well-worked point before Shay McElligott set up Joey Grace for Rangers’ second goal. The ubiquitous McKenna shot over the equalizing point.

However, Shannon Gaels, like a good boxer coming off the ropes, seemed to be able to come up with a counterblow, in this case, Patrick Devlin landing a brace.

But Rangers were content to go toe-to-toe as a strong run by the bustling Mike Ryan was illegally impeded, and the resulting 50-yard shot was nonchalantly thumped over the bar. Then the very industrious Emmett Loughran set up Brian McElligott for the tying score, 1-12 to 2-9, approaching the last water break. Savvy boxers are noted to come out strong for the last round, and Shannon Gaels came out primed and firing on all cylinders for the last quarter as they put the game away by putting five unanswered points on the board courtesy of Conor Mathers (three), and the Devlin brothers.

Rangers needed goals to get back in the hunt but a phalanx of Corridans, Mathers, Doran, Nolan, and company made sure that would not happen, and Rangers had to settle for late points from Joey Grace.

Overall a very exciting and entertaining game and a great testament to the wonderful developmental work being done at the grassroots level.  Shannon Gaels appeared to have the extra gear when needed, and still, they had plenty of good wine left at the end, despite using it copiously throughout the game.

Rangers didn’t want for a good sup either. The captain, Tiernan Mathers, noted in his remarks that there would be more days ahead like this, and before long they would be challenging for honors in the top grade. Hardly an idle boast based upon what we’ve seen so far, and of course St. Barnabas have already set the precedent.

Nearly half a century ago Bob Dylan sang about “The times they are a changin’,” and they certainly are, and for the better may I add, on the New York GAA landscape. For too long New York’s policy has been akin to a dependence on foreign sources of energy, so let’s focus more on developing and promoting our own sources.

An outstanding bunch of lads!! Shannon Gaels couldn’t be more proud of our Men’s Junior B team making history for the…

Man of the Match: Caolan Mathers.

You can watch the entire Shannon Gaels v Rangers Junior B championship final here, courtesy of the New York GAA:

The intermediate final between Kerry and Rangers will be played next Saturday in Gaelic Park at 7 p.m. Kudos to the New York GAA and all involved for wrapping up the season in such a timely manner under very difficult circumstances.