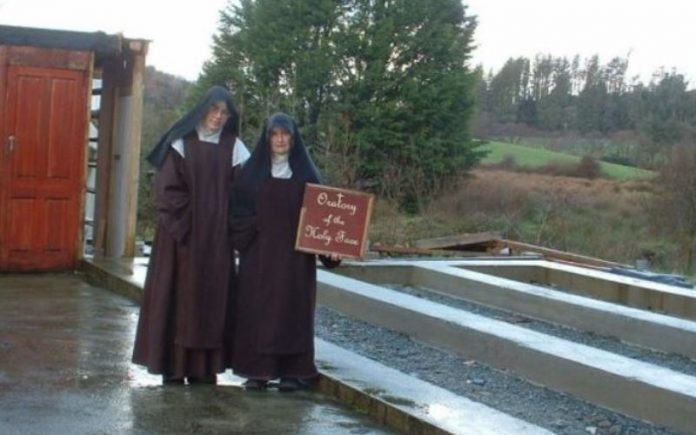 Two hermit nuns have received public donations of nearly €50,000 to find a replacement compound for the home a court ordered them to leave in West Cork.

Mother Irene Gibson, a Dublin-born Carmelite Nun of the Holy Face of Jesus, and her companion, Sister Anne Marie, have been ordered to leave a compound near the village of Leap in West Cork by next June.

According to RTE, Mother Gibson purchased the former garden center at Corran South near the village of Leap in West Cork around five years ago and, without planning permission, developed a two-story oratory and seven wooden pods or sheds where she lived and hoped to develop a community.

In 2019, Mother Gibson was convicted of breaching planning regulations when she set up the premises as a religious retreat.

The nuns had been ordered to demolish the structures and relocate, but due to financial strain and coronavirus restrictions, they were unable.

On September 22, Judge James McNulty heard at Skibbereen District Court heard that only three garden sheds and a container remain on the contested site.

The nuns live in two of the sheds and use the third shed as a kitchen.

The Irish Examiner reports that Judge McNulty acknowledged the nuns made significant steps to dismantle structures they had erected and he gave them until next June to find another home.

The judge outlined that the minimum penalty open to the court was €2,500 and the maximum fine was €5,000.

At earlier hearings, the nuns told the judge of unsuccessful efforts to find alternative accommodation, with property prices in the area ranging from €300,000 to €900,000.

Meanwhile, a GoFundMe page entitled “Carmelite nuns need urgent help!” was launched late last year with a target of €85,000. So far, just shy of €50,000 has been raised.

The page features a video appeal from Mother Irene of the Holy Face and Sister Anne Marie of the Sacred Heart, first shared in January 2020:

Sister Anne Marie, addressing the camera, says, “Cork County Council by enforcing the removal of our buildings is depriving us of our home and interfering greatly in our religious lives of prayer and penance.”

Mother Irene, acknowledging the great support they have received, says, “We know God brings good out of evil and he is always with us.

“And we are greatly encouraged by the fact that you are also with us to support us spiritually, morally, and financially.”

Sister Anne Marie says: “Jesus has great things in store for us.”

Mother Irene goes on to say that the two nuns see in the destruction of their hermitage “the malicious work of Satan working through his disciples.”

“We are determined however to rebuild our lives. By the grace of God, we will continue wherever and however God will open the way for us.

“However, we have not yet gathered sufficient funds to rebuild our life. So, we are greatly in need of your support.”

Kooky invests over £33m in Barnet

Who are you supporting in the 2020 US presidential election?

"Back the industry" – Monart Spa owner on why Irish hotels need a dedicated...

What makes a good property developer?