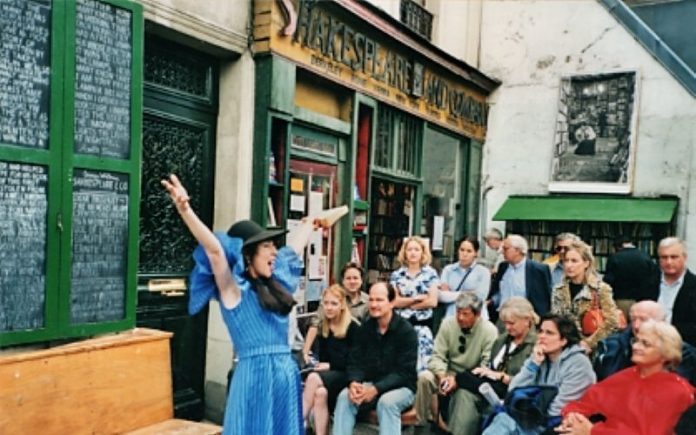 Shakespeare and Company, a bookshop in Paris, France that was the first to publish James Joyce’s Ulysses, issued an appeal for financial support amidst the coronavirus lockdowns.

Shane O’Brien informed IrishCentral readers in his article “Iconic Paris bookshop appeals for financial support” on 6 November how hard times have hit the bookshop due to suffering heavy losses throughout 2020 during the COVID-19 pandemic. He spoke of the iconic bookshop’s appeal for financial support, reminding us that Sylvia Beach who inaugurated “Shakespeare and Company” in 1951 was the first to publish Ulysses in its entirety when so many other doors were slammed shut in James Joyce’s face.

Since the current proprietor, Sylvia Whitman’s, appeal was circulated by the French and global press, people have flocked to the bookshop’s rescue. A previous cry for help by Sylvia Beach, who established the “Friends of Shakespeare and Company” to secure the future of her shop, kept the business afloat through purchases and donations until the economy picked up after the Great Depression. As in the late 1920s, today’s Parisians, ex-pats in Paris, and Shakespeare and Company aficionados in France, the US, and around the globe have all answered “Anseo”!

Paris based artists have equally rallied to the cause. Maria D’Arcy, Irish storyteller and cabaret dancer, based in Paris, has also claimed the closure of Shakespeare and Company “will not happen for any Bloomsday while I am on fire to relive it.” Maria previously performed in Dublin at many Irish festivals and venues, including the Lord Mayor’s Mansion House, and even graced the screen of RTE TV four times before heading to Paris in 1997, with her certificate from the Gaiety School of Acting in her suitcase.

She is now sharing, with IrishCentral readers, a video of a saucy Joycean extract she often performed in the mythical bookshop by the river Seine on Bloomsday. She urges people to become “a friend” of Shakespeare and Company and to pull together to keep the establishment open.

Due to the terrific avalanche of response pouring in from around the world, Sylvia had to temporarily close online book sales until they can catch up with orders. However, people living in Paris, who are able to pick up their books, can use a “call and collect” phone line: 01 43 25 40 93.

Maria’s own artistic contribution to the longevity of the bookshop is through her Joyceanperfomances and her suggestive orgasmic interpretation from chapter 13 of Ulysses when Leopold Bloom and Gerty McDowells’ eyes meet and have virtual tantrum intercourse on Sandymount Beach, here performed at Linda McCluskey’s art studio.

Maria can quote abundantly from Ulysses, her off-by-heart memory of the magnum opus rivaling a bible basher’s skill. She delivers the magnificent words with a theatricality worthy of the best stages in Dublin and Paris. Ulysses has had a profound effect on the two-sided coin of her career; performer (Maria D’Arcy) and author (Maria Sweeney). I was carried away by both her James Joyce performances and by slight Joycean influences on the pages of her own novel where she is swept further away describing a female orgasm in its pages: Seventh Heaven from Seven Perspectives, February 2019, chapter 14.

Maria’s interpretations of Joyce’s words on stage are generally performed to standing ovation. This summer, President Emmanuel Macron announced that bars and pubs could open from Monday 15 June (they are of course currently closed during the second French lockdown). On Tuesday 16 June, Bloomsday, Maria quickly organised a literary event that could have relegated “The Abbey” into the shadows.

The Ulysses event, commemorated annually on that famous date, equates with the day in 1904 when the young James Joyce had his first date with Nora Barnacle. It was hosted this year at la “Galerie Hus” located up in romantic Montmartre, which was a fantastic place to honour James Joyce’s fictional hero Leopold Bloom and wife Molly.

Tristan Cormier, proprietor of this most hip of Parisian Art Galleries, confided that he created the gallery not only to represent artists, but to “re-inject a little life into the neighbourhood.” It would be lovely to see Montmartre live not only as a tourist attraction, but for it to regain the glory of its tumultuous past when the quarter was the throbbing hot spot of artists, their models, and show dancers.

Maria was both the impresario and star of the so welcome show. After suffering eight weeks of social life starvation, we followed her every dramatic movement when, resplendent in an orange Spanish-style dress, she executed a Celtic flamenco on the cobbled pavements, in front of the gallery, before mesmerizing the French and Irish audience with her recitations that did James Joyce proud. Paris based Patricia Costello also read a funny passage from Ulysses and Louise Taylor-Scott sang hauntingly to the accompaniment of Laurent, a French accordionist. David Henry, a renowned American Paris-based photographer, and Gene Ruda picked up their guitars in honour of the Irish.

That joyous event attracted many of the Irish Community in Paris, including Paul Lynch, President of the Irish in France, and Eileen Grison our own “Deputy of the Republic of Montmartre.”

Maria had another landmark Joycean performance in the Santa Maria restaurant, located in the bohemian bourgeois area of “Les Batignolles” in September, during another of those rare windows of freedom between lockdowns and curfews. She was accompanied by Isabelle Sojfer in a scintillating two-woman show, the “Naughty Dames of Paris.”

Maria recited for the very first time in French, choosing the passage, often referred to as “Molly Bloom’s Soliloquy”, a long and unpunctuated stream of consciousness comprising Molly’s thoughts as she lies in bed next to Bloom, from the final chapter and final page of Ulysses.

The solidarity around Shakespeare and Company during this Covid period looks like it will even beat the solidarity shown during the Great Depression. In difficult times, Parisians and Paris’ ex-pats feel a strong affinity with their bookshops and are putting pressure on the government to reopen them during this current lockdown.

Parisian wine shops, regarded as being “essential stores”, have been open since Covid regulations were put in place last March! Parisians, whose streets are paved with the words of writers and philosophers, are now pointing out that Parisian bookstores are also “essential” in our hour of Covid need.

Looking for Irish book recommendations or to meet with others who share your love for Irish literature? Join IrishCentral’s Book Club on Facebook and enjoy our book-loving community.