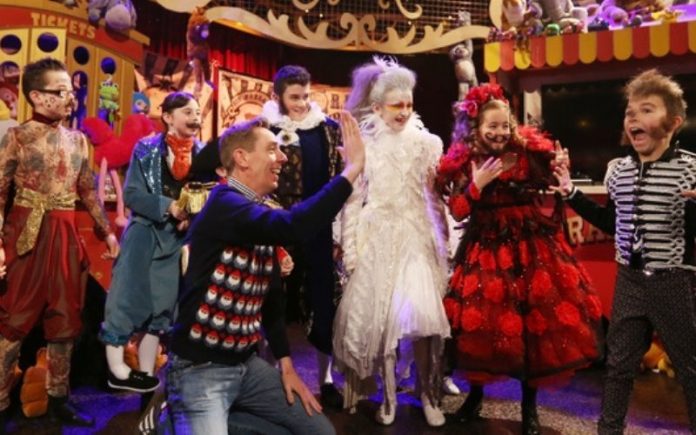 The Late Late Toy Show, one of the biggest events in the Irish television calendar, is set to return to Irish screens this Friday night.

Hosted by Ryan Tubridy, this year’s Late Late Toy Show is set to be unique, taking place in front of a virtual audience for the first time ever due to the COVID-19 pandemic.

The coronavirus pandemic cast doubt over whether there would be a Late Late Toy Show at all this year, but Tubridy took to the airwaves earlier in the year to assure fans of all ages that the show would go on.

“We know, now more than ever, that the kids of Ireland, who have been so good, deserve a night like no other,” Tubridy told listeners in October. “So we’re putting more effort and more love into this thing than you can imagine.”

This year’s Late Late Toy Show will kick off at 9:35 GMT on Friday, Nov. 27, on RTÉ One and will be available to viewers around the world on the RTÉ Player.

The theme of this year’s show will be “The Wonderful World of Roald Dahl”, with Tubridy set to kick off the show dressed as Fantastic Mr. Fox in an opening number that features some of Dahl’s most revered characters, including Matilda, the Oompa Loompas, and a reference to James and the Giant Peach.

“This has been a year like no other, and therefore requires an opening like no other,” Tubridy said. “The Wonderful World of Roald Dahl is one that understands children in a way that no one else ever has.”

As always, this year’s show will feature a host of performing children and will also feature a selection of children joining in virtually from around the world, who will be accompanied by a very special guest singer.

All toys trialed by children on Friday night’s show will be donated to children’s charities across the country, as has become tradition.

The Late Late Toy Show has been running every year since 1975, when a 30-minute slot was set aside at the end of a regular Late Late Show to give parents ideas for their children’s Christmas presents.

The show has taken on a life of its own in the 45 years since and is now one of the most-watched television events in Ireland every year.

Last year, the show pulled in a whopping 1.35 million viewers, making it the most-watched program of 2019.