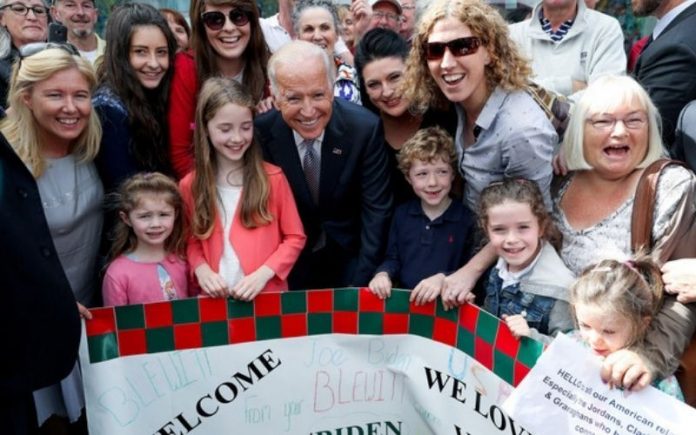 Hundreds of people in Joe Biden’s ancestral Irish home gathered on Saturday to celebrate his victory in the 2020 presidential election.

Residents of Ballina in County Mayo, with Biden’s Irish cousins to the fore, popped bottles of champagne after all major US networks called the race for Biden on Saturday afternoon.

The first bottle of champagne was actually popped more than two hours before CNN called the race on Saturday when hundreds of Ballina residents gathered in the town’s Market Square to celebrate Biden’s imminent victory.

The joyous crowd celebrated by blaring Biden’s campaign song – “We Take Care of Our Own” by Bruce Springsteen – out of a speaker in the square and they also blasted Bill Clinton’s walk-on music from his successful campaign in 1992 – “Don’t Stop (Thinking About Tomorrow) by Fleetwood Mac.

Joe Blewett, Biden’s third cousin from Ballina, joined the celebrations and told the New York Times that the President-elect was “presidential material”.

“When he came back in 2017 to turn the sod for the hospice, we had lunch with him and his brother, and he’d no security this time, and we just talked about all sorts. He could be all day talking and telling stories. He has a few good ones. He’s a long time at it,” he told the New York Times.

However, it is not just his cousins that are celebrating his historic victory.

The Mayo town of Ballina is deeply proud of its ties to Biden, who visited during a state visit to Ireland in 2016 and again on an unofficial visit in 2017.

He is now the second world leader to emerge from the small town with former Irish President Mary Robinson also hailing from Ballina, and locals think that his election is a source of inspiration for younger residents.

Aileen Horkin, a primary school teacher in the town, told the New York Times that Biden’s election could fuel the dreams of local children.

“It’s amazing to think of it. I can tell any child in my school that they can grow up to be a president,” Horkin told the New York Times.

With Biden’s victory appearing increasingly likely as the week dragged on, locals in Ballina wanted to mark such a momentous occasion for the town with a fitting celebration and so the Ballina Community Clean Up Group set to work on Friday to prepare the town for a party.

The group hung a string of stars and stripes bunting in the shadow of a giant Biden mural in the town, while local print shops printed posters of the President-elect in Mayo colors alongside the caption “Go Mayo, Joe.”

Locals also erected Irish and American flags outside their homes as Biden inched his way closer to victory by overtaking President Donald Trump in the key swing states of Georgia and Pennsylvania.

It was Pennsylvania where Biden’s Irish ancestors emigrated to in the 1800s and locals believe that the long-standing connection between Ballina and Scranton enabled the Democratic candidate to flip the state of Pennsylvania.

Gerry Luskin, the chair of the Ballina Chamber of Commerce, said that a number of Ballina residents emigrated to Scranton, including Biden’s own ancestors, and this proved pivotal in Biden picking up 53% of votes in Lackawanna County; the county where Scranton is located.

“When we saw Lackawanna county turn blue on CNN, we said that’s all the Ballina people who went there,” Luskin told the New York Times.