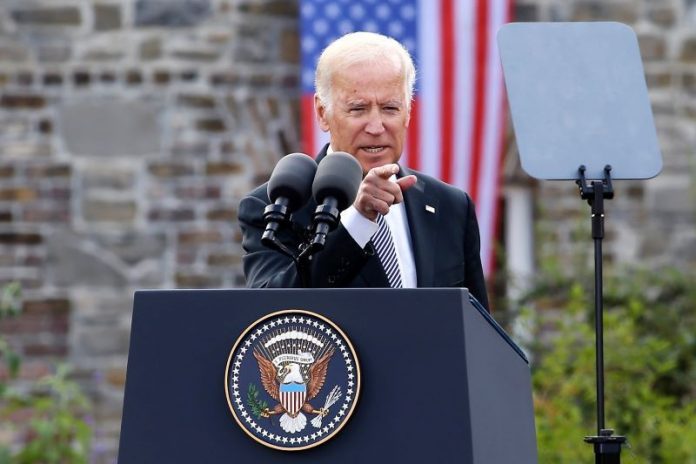 President-elect Joe Biden has again reiterated his stance on a border on the island of Ireland.

Commenting on Brexit while speaking with reporters in Wilmington, Delaware, President-elect Joe Biden said on Tuesday evening: “We do not want a guarded border. We want to make sure – we’ve worked too long to get Ireland worked out.

“The idea of having the border north and south once again being closed, it’s just not right, we just got to keep the border open,” he said.

I asked US President-Elect @JoeBiden about #Brexit. He told me: “We do not want a guarded border.., we’ve worked too long to get Ireland worked out” @rtenews pic.twitter.com/gIhjlhZwjJ

Biden’s comments come just a day after the President of the European Council Charles Michel “thanked the President-elect for his clear support regarding the implementation of the Withdrawal Agreement the EU concluded with the UK last year. This agreement preserves peace and stability in Ireland and fully respects the Good Friday Agreement.”

This isn’t the first time that Irish American Catholic Biden has made his thoughts known about a border on the island of Ireland. In September, while he was still on the campaign trail, Biden said in a tweet: “We can’t allow the Good Friday Agreement that brought peace to Northern Ireland to become a casualty of Brexit.”

We can’t allow the Good Friday Agreement that brought peace to Northern Ireland to become a casualty of Brexit.

Any trade deal between the U.S. and U.K. must be contingent upon respect for the Agreement and preventing the return of a hard border. Period. https://t.co/Ecu9jPrcHL

Elsewhere, President-elect Biden continues to make announcements regarding his White House senior staff and appointments. His campaign manager and proud Irish American Jen O’Malley Dillon has been named Deputy Chief of Staff, while fellow Irish American Jake Sullivan has been nominated to be the next National Security Advisor. Former Secretary of State John Kerry has been appointed as Special Presidential Envoy for Climate.

On Monday evening, President Donald Trump said that he had given the go-ahead for the official presidential transition proceedings to commence, but still refused to concede the presidential race.

What does GSA being allowed to preliminarily work with the Dems have to do with continuing to pursue our various cases on what will go down as the most corrupt election in American political history? We are moving full speed ahead. Will never concede to fake ballots & “Dominion”.

On Tuesday, it was revealed that Joe Biden has become the first US presidential candidate ever to receive more than 80 million votes. Both Biden and Trump have broken former President Barack Obama’s 2008 record of 69,498,516 votes this year.