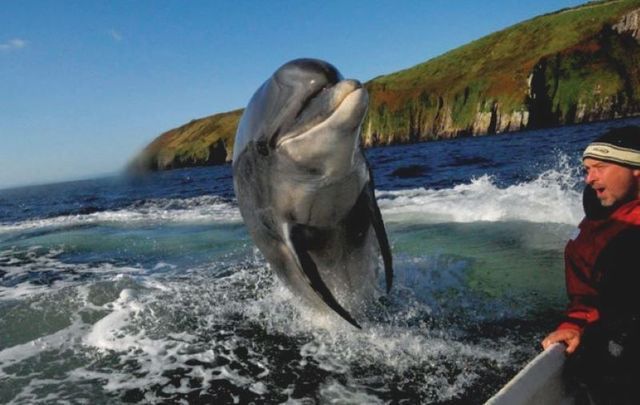 There is growing concern over the health and wellbeing of beloved Kerry dolphin Fungie, who has now been missing for five days.

Kerry fisherman Paul Hand had initially eased fears over Fungie’s health earlier in the week when he reported seeing the dolphin as he searched Dingle Bay on Thursday, but the dolphin has not been seen since and local boatmen are starting to worry.

There have been extensive searches of the mouth of Dingle Harbor – where Fungie usually surfaces to greet boats – at first light over the last few days, but the searches have yielded no results so far.

Gary Brosnan, a local Dingle boatman, said that the situation was now serious but that he remained hopeful that the dolphin would be found alive and well.

“This is fairly serious now. Fungie very rarely leaves the mouth of the harbor and he has never, ever been missing for this long,” Brosnan told RTÉ News.

He said that there has been an easterly wind blowing off the land recently and that can drive fish-life out to sea.

“Our hope is that Fungie has gone out following the feed and will come back to us once the wind comes around to the south-west,” he said.

There was a pod of dolphins feeding about two miles off the coast of Kerry, Brosnan said, but Fungie wasn’t amongst them. This isn’t unusual, however, as Fungie normally doesn’t like the company of common dolphins.

The famous Kerry dolphin initially went missing on Tuesday, Oct. 13, and was only seen on Thursday by Kerry fisherman Paul Hand, who told RTÉ that he was “1000% certain” that he saw Fungie.

However, local fishermen say that it is extremely unusual for Fungie to have left Dingle Harbor for this length of time.

They said that the dolphin never usually disappears for more than five or six hours.

Fungie first arrived in Dingle Harbor in 1983 and has been entertaining tourists and local fishermen ever since with his friendly and lively nature.

The dolphin is the world’s oldest solitary dolphin and has far exceeded the average life expectancy of a common bottlenose dolphin, which is somewhere between eight and 17 years.

He has been a huge draw for Kerry tourism over the past four decades and up to 12 boat tours head out to sea every day packed with tourists eager for a glimpse of the iconic dolphin.