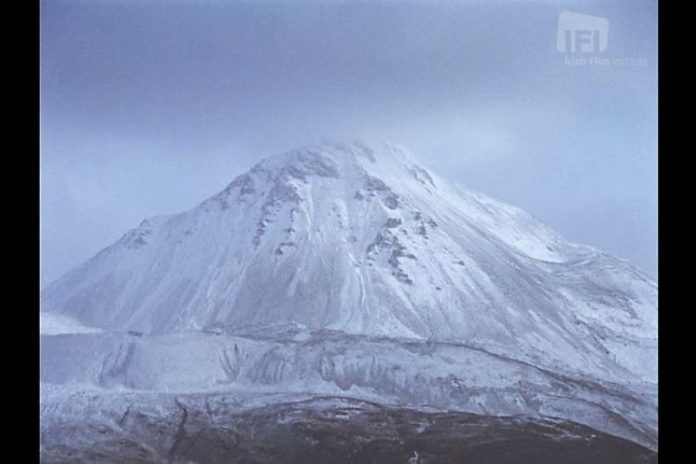 The Irish Film Institute (IFI), based in Dublin, has commemorated World Audiovisual Day with a special look at Oscar-nominated filmmaker Patrick Carey’s film “Errigal,” which is set against the scenic backdrop of Mount Errigal in County Donegal.

Of the short film that is available to watch for free on the IFIPlayer, the IFI says: “The mountains of Donegal are depicted like fairytale characters, where the hero Mount Errigal competes with neighboring villain Mount Muckish.

“A fantastical narrative explains that the landscape is ‘a battleground where the weapons are the elements themselves’. Dramatic footage of storms and lightning blends with a superb score by Irish composer Brian Boydell.

To mark World Day for Audiovisual Heritage, which is observed every October 27, the IFI’s Archive Datacine and Grading Officer Gavin Martin wrote a blog discussing his work scanning and remastering Carey’s observational and reflective work.

World Day for Audiovisual Heritage was launched in 2005 by UNESCO to raise awareness of the significance and preservation risks of recorded sound and audiovisual documents (films, sound, and video recordings, radio and television programmes.)

In his blog for the IFI, Martin writes: “When the IFI’s Irish Film Programming department submitted a request for a digital exhibition copy of Paddy Carey’s 1970 short film Errigal, I jumped at the opportunity to work on one of the finest examples of landscape cinematography held in the archive.

“The film derives its power from a magical fusion of changing light, shadows, and contrasts, shaped by Irish weather and cloud formations over the Donegal landscape. These nuances illustrate why Patrick Carey’s involvement was highly sought for big international feature productions. Bringing Errigal’s meticulous images back to their initial levels of colour and contrast, from 50-year old film elements, was difficult but rewarding.

After detailing the meticulous process of bringing Carey’s film up to modern standards, Martin said: “Working on these projects, you sense the presence of the filmmaker, their past choices guide your present ones. You habitually question your decisions. If they were still present would they be happy with this choice? Is it true to the film? You find if you step away for a minute, then go back, you wonder why you doubted yourself in the first place.

“These decisions service a conscientious representation of the filmmaker’s intentions. It also helps prior to final delivery to step out of the bubble of immersion and summon a colleague versed in working with archival film to evaluate the work from a fresh perspective.

“I hope my efforts to revitalize Errigal have been fruitful and that you enjoy watching it as much as I did working on it. I also hope that this blog sheds light on the work we’re doing in ‘digital film’ at the IFI Irish Film Archive, and that we can unearth many more cinematic works of beauty and make them presentable for you in the future.”

The video below is published with thanks to the Irish Film Institute (IFI), who IrishCentral have partnered up with throughout 2020 to bring you a taste of what their remarkable collection entails. You can find all IrishCentral articles and videos from the IFI here.

IrishCentral has partnered up with the IFI throughout 2020 to bring you a taste of what their remarkable collections entail. You can find all IrishCentral articles and videos from the IFI here.