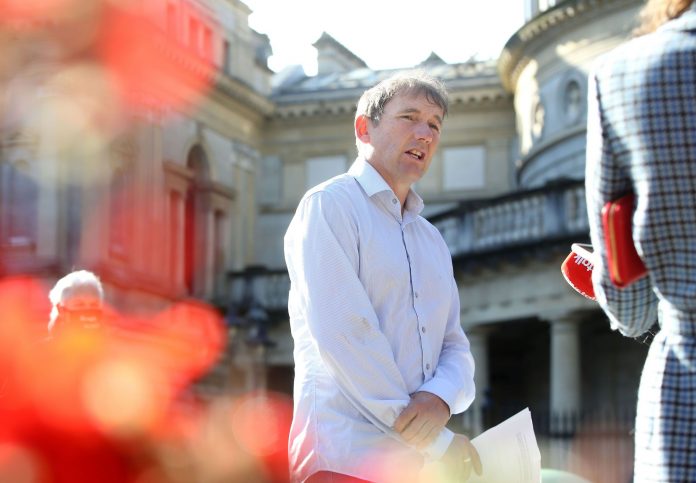 The Dying with Dignity Bill, which seeks to “make provision for assistance in achieving a dignified and peaceful end of life to qualifying persons and related matters,” progressed to the committee stage within the Dáil Éireann on October 7.

Although initially introduced by TD John Halligan 2015, the Bill was reintroduced to the Dáil in September by People-Before-Profit TD Gino Kenny. It is cosponsored by TDs Bríd Smith, Paul Murphy, Mick Barry, and Richard Boyd Barrett.

On Wednesday night, TD Kenny said in a tweet that the 81 – 71 vote for  the Bill to progress to the third committee stage was an “amazing result:”

Amazing result tonight. Thanks to all the TD’s who voted for the bill to proceed to committee stage. Thanks to the the amazing Vicky Phelan, Tom Curran and Gail O’Rorke for their support. Sometimes issues like this transcend politics. This was the occasion.

After the legislation progressed, co-sponsor and Rise TD Paul Murphy said: “A clear majority of the Dáil voted in favour of the bill in broad principal. So they support the idea that people with a terminal illness and in extreme pain can have assistance in dying.”

Speaking with Newstalk Breakfast the day after the Bill progressed, TD Kenny explained the parameters of the proposed legislation: “The limited circumstances would be those that has a terminal illness that is incurable and progressive, and that will lead to that person’s death.”

He added: “In relation to advanced age, anybody suffering from mental health issues, disability that doesn’t come into the legislation at all.

“The safeguards are there, there’s a huge oversight in relation to the bill itself. And obviously, the bill, when it goes to the committee stage, can be changed, and it will.

“Opposition bills when they do go to this next stage – it’s called pre-legislative scrutiny – they can be changed, sometimes dramatically. So we’re open to that.”

“We need scrutiny and we need oversight, and we need all the voices to be heard in relation to this,” he added.

TD Kenny said he is hopeful that a report will be put to the Oireachtas early next spring to be legislated for, “or possibly even a referendum.”

While TD Kenny says he is open to scrutiny on the Bill, and is keen to define its parameters, some religious groups have expressed concern with its progress.

In a statement entitled ‘Care at the End of Life,’ the Irish Catholic Bishops’ Conference said: “Assisted suicide is often presented as something that would be rare and exceptional. Once assisted suicide is accepted in principle, it becomes very difficult to draw a line.

“Many countries, which began by legalising assisted suicide on a very limited basis, have moved on to widen significantly the scope of that legislation.”

Rt Rev Dr. David Bruce, the Moderator of the Presbyterian Church in Ireland, said: “We are deeply disappointed and gravely concerned by last night’s vote. This Bill of course raises fundamental questions about the value that is placed on human life in Ireland, something that we firmly believe to be a gift from God.”

The Church of Ireland, however, declined to take a side on the matter and instead urged sensitivity in discussions. Archbishop of Armagh Most Revd John McDowell and the Archbishop of Dublin Most Rev Dr. Michael Jackson said in a joint statement on Thursday: “We affirm the sacredness of human life, in its totality from beginning to end, as a gift given by God, and that each and every human life is intrinsically valuable in all its phases.

“It should also be recognised that very difficult situations and emotions can arise from the management of care towards the end of a life and the discussion of personal circumstances always requires the utmost sensitivity. Such sensitivity should also be borne in mind in the public debate around these issues.”

You can read the Dying with Dignity Bill 202 here.