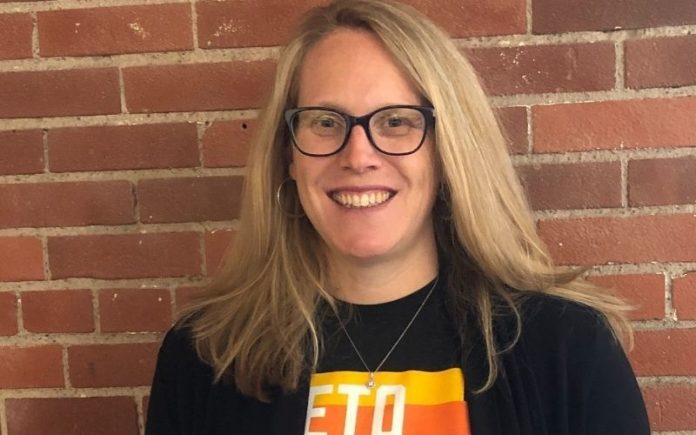 O’Malley Dillon follows former Trump Campaign Manager Kellyanne Conway – also of Irish ancestry – as only the second woman to serve as a campaign manager on a successful presidential campaign.

Born in Franklin, Massachusetts, O’Malley Dillon can trace her ancestry back to Ireland through her great-grandparents, who emigrated from Gorumna Island in County Galway.

As a member of the Democratic Party for more than 20 years, O’Malley Dillon has blazed a trail through and worked on four separate presidential campaigns, first serving as a field organizer in 1999 for Al Gore in his unsuccessful bid for the presidency.

Eight years later, she joined Barack Obama’s presidential campaign as a battlegrounds states director and helped his transition into power after he won the 2008 election by serving as an assistant director of personnel.

She again served on Obama’s campaign in his re-election bid in 2012; this time rising in the ranks to serve as his deputy Campaign Manager.

O’Malley Dillon wasn’t involved in Hillary Clinton’s 2016 campaign, instead serving as the chair of the Democratic National Convention’s Unity Reform Commission, but she would go on to make history four years later by joining the Biden Campaign as Campaign Manager.

The Irish-American strategist initially acted as Campaign Manager for Beto O’Rourke but joined the Biden Campaign after O’Rourke pulled out of the race and rallied behind the President-elect.

O’Malley Dillon was reportedly responsible for the Democrats’ “Blue Wall” strategy, which saw the party focus more time and money on the key swing states of Michigan, Pennsylvania, and Wisconsin; states that were narrowly won by Joe Biden in this year’s election.

Like President-elect Biden, O’Malley Dillon has long been proud of her Irish roots.

In 2015, she said that she was “proud to be Irish” after the country legalized same-sex marriage in a landslide referendum, while this year she joined a virtual event celebrating the O’Malley Clan and County Mayo.

Proud to be Irish American every day but especially today! #MarriageEquality #GráISTheLaw