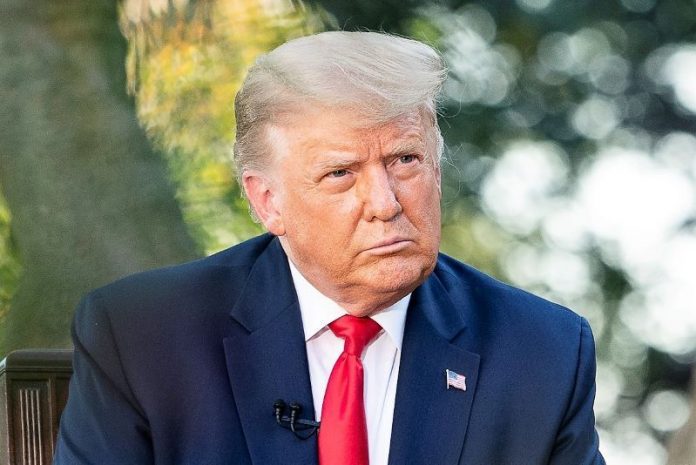 Raise your hand if you’re one of the undecided voters out there ready to support the presidential candidate who most enthusiastically attacks the country’s top infectious disease doctor.

*Editor’s Note: This editorial first appeared in the October 21 edition of the Irish Voice newspaper, sister publication to IrishCentral.

We’ve known for some time now that President Donald Trump has lost the plot. Many feel that was the case from the first day he stepped inside the Oval Office; others who were willing to give the certifiably broke reality TV “star” a chance surely must understand by now that Trump is, to use one of his favorite put-downs, a stone-cold wack job.

In Trumpworld, Dr. Anthony Fauci is an “idiot” and a “disaster,” while people who convene side by side without masks at his rallies, or at the White House Rose Garden, are great patriots even though there’s a pandemic that is, to use another top Trump term, winning.

The real idiot is the guy who got Covid (along with his wife and teen son) and a taxpayer-funded helicopter ride to Walter Reed Medical Center for treatments unavailable to the patriots who will also get the virus.

We just have to hope that this national nightmare of the Trump presidency will end after the November 3 election.

It’s been one disaster after another after another – hatred of immigrants, proponent of conspiracies, blatant race-baiting, etc.—but the thing that will ultimately do Trump in at the end is the little piece of cloth that costs less than a buck, and can save an untold number of lives if worn.

The fact that this president decided to politicize a mask as being a sign of weakness instead of health, un-macho instead of strong, has undeniably resulted in sickness and death on a truly shocking scale.

All he had to do when it became evident after the start of the pandemic that masks help prevent virus transmission was get up on his podium and encourage Americans to wear them, and do their utmost to stay six feet apart from each other.

That’s it. He could have been the Covid hero if he listened to the experts and decisively led the way out of this horror.

Had he chosen to talk sense instead of nonsense during those painful early press briefings which fed his constant craving for TV ratings instead of offering real leadership to the country, Trump might now be looking at a reelection race that would have been his to lose.

Instead, he’s in a hugely uphill battle that makes 2016 look like a cakewalk.

The polls have been consistent for months – Americans are fed up and exasperated with Trump’s handling of the pandemic and how he’s used it in the most sinister way to further divide the nation.

We should be showing the world how to fight the virus, how to bring the infection rate way down, how to keep our people safe, and at the same time, maintain our economic engine and take care of those whose livelihoods have been upended.

Masks. Sanitizer. Social distance. The three golden rules. Another stimulus relief package from the government to use our taxpayer dollars for us in our time of need.

But no. The psycho-in-chief needs constant adulation at packed rallies. The only financial relief he’s capable of figuring out is for himself – witness his annual $750 tax return.

Trump didn’t invent Covid-19.  For sure there was going to be death and economic upheaval when it came to our shores, but it didn’t have to be so atrocious.

If he had worked hand-in-hand with the experts instead of sidelining them and pretending to know better, we’d be looking at a different America as we reach the end of what’s been a doozy of a bad year.

But we’ve got more than 222,000 dead Americans now, thanks to Covid coupled with Trump’s blatant ineptitude. And more to come.

Joe Biden has promised to clean up this mess. We’ve never needed a change of leadership at the top as much as we do now, and if the polls are right, we’re about to get it, and not a moment too soon.