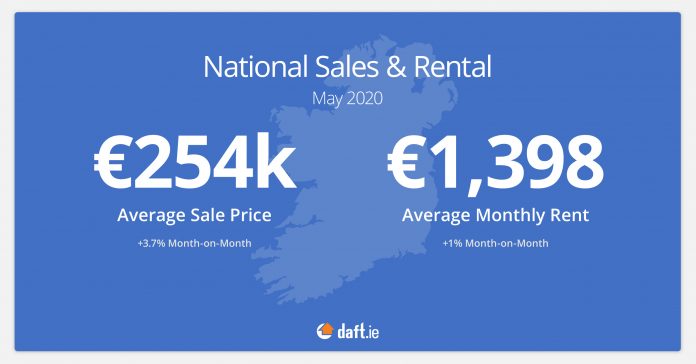 June sees the launch of a new form of Daft.ie Report. On a monthly basis, we’ll be releasing the latest facts and figures from the housing market – both sale and rental. In large part, the move to monthly is due to the disruption caused by Covid-19, which is easily seen from looking at the latest figures.

The average listed price nationwide rose by 3.7% between April and May – a very large shift for just one month – but that was only partly offsetting the fall of 5.5% seen between March and April. A fall of more than 5% is unprecedented. Even in the 2007-2012 crash, there was only one month – October 2011, when prices fell 4.1% – that came close.

The rebound in May tells us a bit more about the fall in April. It is less about the market finding a new level – although of course that may still happen, depending on how Covid-19 affects the real economy. Rather, April’s sellers were – understandably – nervous and uncertain. That uncertainty had moderated slightly in May so sellers in that month were, on average, less nervous about what the future will bring.

Not that May was a return to normality in the market. In both April and May, across the country as a whole, the number of properties put up for sale was down over 70%. But clearly, even in a thin market, there was a different air in May than in April. As the economy opens up again over the summer, it will be interesting to see how this translates into a sale market that will have to find its feet again.

In the rental market, the number of ads in May was up slightly nationwide – by 6%, compared to the same month last year. That hides a big difference between Dublin, where rental listings were up 40%, and the rest of the country, where listings were down. In the rest of Leinster, there were just 1,234 rental listings across both April and May this year, compared to almost 1,900 in the same two months in 2019.

Overall, the rental market has proven less volatile than the sales market in recent months. Rental prices nationwide did fall 2.1% in April, compared to March, a substantial fall, but this was far less than was seen in the sales market. Similarly, the ‘bounce back’ in May was much more muted (0.6%).

This leaves the national average rent still slightly higher than a year ago (+0.7%) and the national average sale price 1.6% lower than a year ago. As the country opens up again, over June and July, there will be time to assess the economic damage – in particular the damage that lasts beyond the lockdown. The greater that damage is, the more likely it is that both sale and rental markets will indeed seek out a new lower price level in the months ahead.