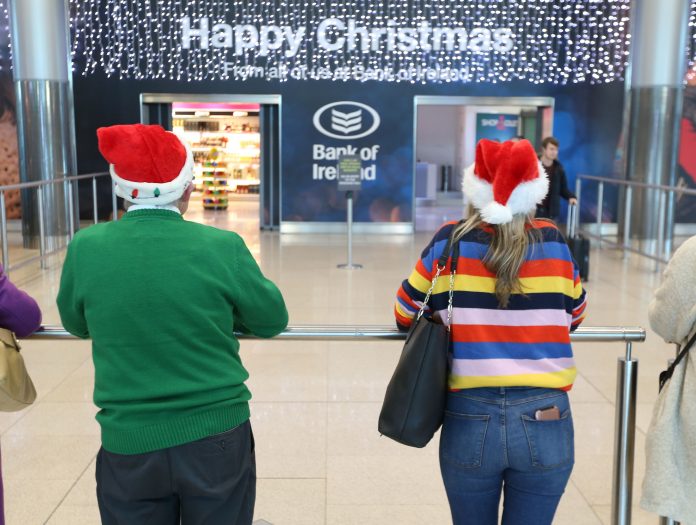 Ireland’s Chief Medical Officer Dr. Tony Holohan told politicians on Tuesday that there is a “substantial risk associated with international travel” at the moment.

As Ireland continues its battle against COVID-19 – and neighboring England goes into a belated month-long lockdown on Thursday – Holohan warned the Oireachtas Transport Committee of the continuing risks of international travel.

He said that if testing of airline passengers is introduced, it would still be “efficient” to mandate a five to seven day period of restricted movement, with a symptom check on day five – and even this approach can still miss up to 15 percent of imported cases.

Holohan’s observations prompted concern within families planning Christmas reunifications with overseas members.  They remain in the dark over whether they will have permission to travel home for Christmas.

Asked when he would be able to give advice to the government on people flying home to Ireland for Christmas, Holohan said his National Public Health Emergency Team (NPHET) would continue to assess the evidence.  He said it was not possible to look forward past a period of six weeks.

He understood the sensitivity for families who had not seen each other for many months. But NPHET had to advise on the risks so that it does not put the country at risk with arrangements that could lead to the importation of the disease over the month of December, he said.

In his opening statement to the committee, Holohan pointed to data showing that at times during the summer, travel-related cases accounted for around a quarter of illnesses. International travel would continue to represent a prominent area of risk as the disease came under control nationally.

Holohan acknowledged that although long term travel restrictions are difficult, Ireland should look to the travel policies of countries, particularly in Asia, that have achieved sustained low rates of transmission through controlling importations of the virus.

Separately, according to a report in the Irish Daily Mirror, Holohan told an earlier press briefing that “all measures will be examined” on considering whether people will be able to return home from abroad for Christmas.

One glimmer of hope for anyone looking to return to Ireland for Christmas, at least from another European country, is the new traffic light system of foreign travel adopted by the European Union.

But with case numbers at sky-high levels in almost every European country, this system is effectively defunct at present.

If Ireland and other countries work to flatten the curve and suppress the virus before Christmas, the traffic light system could come into effect, allowing largely free travel within Europe.

Paul Brandon of the Irish Aviation Authority told the Oireachtas committee that Ireland must plan for scenarios where vaccines are not widely available any time soon.

He said, “It is the Irish Aviation Authority’s view that Ireland should take a lead in promoting a standard approach to airport departure testing and the removal of quarantine requirements across Europe.

“Yes, this would be brave leadership, but it is the type of Europe-wide, forward-thinking diplomacy that Ireland is good at.”

He added, “Now is the time to rediscover our pioneering spirit, the spirit that established Ireland as a global aviation leader, a spirit which can now be used to get the aviation industry off its knees and play a key role in leading the economic fightback against COVID-19.”