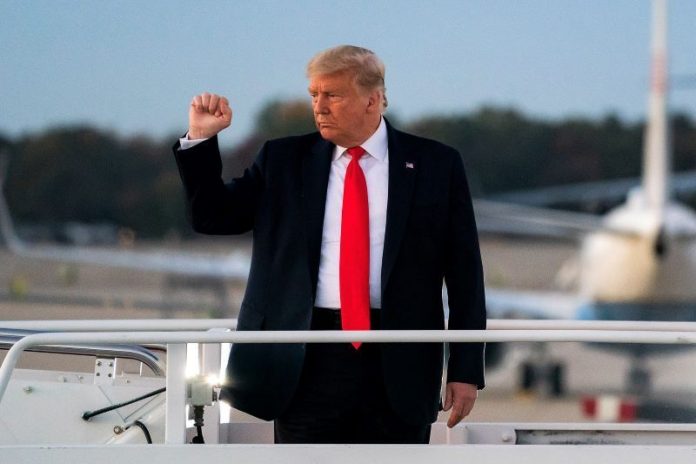 Despite everything else going on here in Ireland, the U.S. election has been given huge coverage in the Irish media in recent weeks. Hours of TV news time, pages and pages in newspapers.

*Editor’s Note: This column first appeared in the November 4 edition of the Irish Voice newspaper, sister publication to IrishCentral.

Ireland has always been interested in what happens in America, but not since JFK have we seen such fascination with who will occupy the White House.

Much of the coverage here has been apocalyptic in tone.  All of it has been anti-Trump. If the orange ogre gets back the U.S. is doomed, etc.

Joe Biden may be old and a bit forgetful but he’s the only hope, for America and the world. And he’s one of us, of course, which plays well here.

But let’s step back for a moment and try to be objective. There’s a momentary quiet time after all the noise, the accusations, and insults of the last few weeks.

Since this column was written before the result is known, we can use this quiet time for a dispassionate assessment of what became the biggest issue of the election — in fact the ONLY issue — the way the Trump administration has handled Covid.

Despite Trump’s increasingly desperate attempts to shift attention to the economy and jobs, to foreign policy or anything else, there really was only one story in the election. Covid, Covid, Covid, as Trump began to say in frustration. The doomsday coverage was relentless and as far as the media was concerned, the dire situation in the U.S. was all Trump’s fault.

The media concentration on Covid was justifiable, of course. It’s the biggest threat to the U.S. and the rest of the world in decades.

But there is a difference between reporting the Covid story fairly and using it to destroy the candidate in the election that almost all the U.S. media hates. They may have many good reasons for disliking Trump, but that does not make this either justifiable or good journalism.

In this column last week, we pointed out that although the Covid numbers in the U.S. are tragic and shocking, the Covid death rate in the U.S. is exactly the same as it is in the U.K.

That brings to mind the phrase “lies, damned lies, and statistics.” It ignores the fact that many big countries around the world are not counting Covid deaths accurately or at all, because they are too poor and disorganized to do so. Some are actively suppressing the numbers and others we simply cannot believe anything they say.

In contrast with the global figure, the comparison with the U.K. figure is valid. It’s a developed country like the U.S., and both are honestly and accurately reporting the number of people dying with Covid.

So to repeat, the Covid death rate in the U.S. and the U.K. is the same. Now that the campaign is over, is it too much to expect that CNN, etc. might start focusing on this?

None of this is to justify Trump’s handling of the virus, the early promise that it will “go away” like the flu, the ongoing refusal to take it seriously, the idiotic meandering at press conferences about swallowing bleach, about unproven therapeutics, etc. In particular, his cavalier attitude to mask-wearing and social distancing, and more recently his facile claims that the U.S. is “rounding the turn” all underline a gross failure in leadership.

He could have made a difference by taking the threat seriously and leading by example. In doing so, he could have helped to save lives.

Instead, in an attempt to shore up his vote by pretending that everything was under control, he continued to talk nonsense about the virus and downplay what we all have to do to suppress it. Whoever wins the election, he and his conscience will have to live with that.

Despite this litany of failure, however, it is simply not true that Trump did nothing to fight the virus. There was his early shutdown of travel from China (although not as early as some of its neighbors in the region who acted immediately because they knew from experience the Chinese regime cannot be trusted).

There was his provision of massive funding, emergency hospital beds, and the impressive ramping up of ventilator production. And there was the hugely expensive pandemic payments to help the millions losing their jobs and the business supports to try to keep companies afloat.

He didn’t get credit for any of that because it did not fit the media narrative of failure. Instead, the aim every day was to belittle and undermine whatever he did.

Stupidly, he played into this by continuing to talk off the top of his head about unproven “cures” for the virus when he should have been strictly limiting his remarks to proven science.

Where Trump was most culpable was in his lack of leadership on the simple things, the mask-wearing, hand washing, social distancing, and so on. Coupled with that was his determination to reopen the economy, to get back to “normal” as quickly as possible, well before the election.

He was not alone in this misjudgment, however. Countries across Europe (including Ireland) made the same mistake this summer and are now paying the price with a rampant second wave of the virus.

Major parts of the European economy have stopped functioning, travel has ground to a halt again and people are just hanging in there, hoping the lockdowns may make it possible to partially reopen for Christmas. Even if that does happen, there is the fear that we will be back into lockdown again in the new year. The truth is that nothing is going back to “normal” either here or in the U.S. until we have a vaccine.

On that front, Trump has been promising for some time that a vaccine is only weeks away, and again this has been either ridiculed or downplayed by the media. Having destroyed his own credibility on Covid, he is partly to blame for this himself. The fact is, however, that at this stage Trump appears to be right.

Luke O’Neill, professor of immunology at Trinity College in Dublin and an expert in biochemistry with wide contacts in the industry, produced some interesting information for an article in the Sunday Independent paper here at the weekend.

More than half a dozen of the big pharma companies (many of whom are based here) have now successfully concluded Phase 2 trials of their vaccines and are into the final Phase 3 stage. Pfizer, according to O’Neill, is getting ready to produce 1.3 billion doses of its vaccine in anticipation of the Phase 3 trials being a success.

Of course, there may still be setbacks, but it would not be doing that if it was not confident, including preparing a facility in Kalamazoo in Michigan to store several hundred million doses and another massive storage facility in Europe.

Pfizer has been working on rapid distribution for some time so that it will be ready once final approval of its vaccine is forthcoming. According to O’Neill, Pfizer has booked dozens of cargo jets and hundreds of trucks.  Each truck will be able to carry seven million doses. “That means one truck could vaccinate all of Ireland and more,” O’Neill wrote.

The U.S. government has ordered 100 million doses of the Pfizer vaccine, with an option to buy a further 500 million doses.  Trump has repeatedly stated that he has the military on standby to assist in rapid distribution once a vaccine gets the green light.

All going well, Pfizer and another big pharma company, Moderna, are now just three weeks away from concluding Phase 3 trials of their vaccines, O’Neill said. And other candidates like the AstraZeneca-Oxford and Johnson & Johnson vaccines are also progressing quickly.

In all, at least half a dozen vaccines are likely to be available early in the new year, with one or two possible for front line workers and the most vulnerable even before Christmas.

Which is comforting news to all of us.  But will it have been a comfort to Trump Hopefully, when you read this we will know one way or the other.