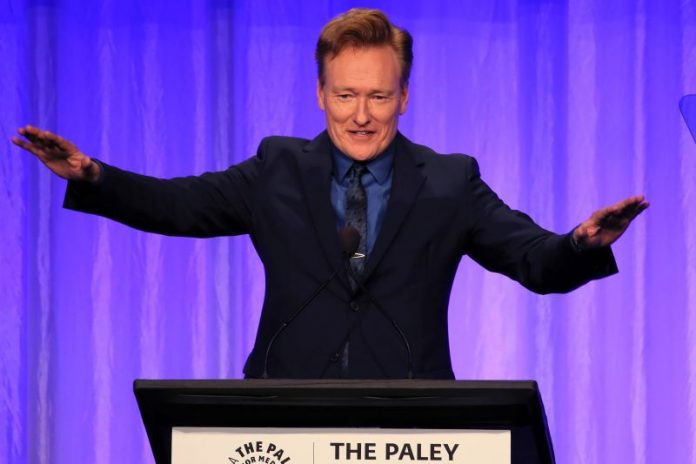 While ‘Conan’ will end in June, ‘Conan Without Borders’ will continue. The Irish American funnyman has also committed to a weekly variety show with HBO Max.

A statement issued by WarnerMedia on November 17 read: “After an extraordinary 28 years as a late-night television host, including a ten-year, critically-acclaimed run on TBS, Conan O’Brien will extend his relationship with WarnerMedia with a brand new, weekly variety series on HBO Max.

“As one of the most prolific late-night hosts, O’Brien will conclude TBS’ award-winning nightly talk show “CONAN” at the end of its tenth season in June 2021. His signature travel specials, “Conan Without Borders,” will continue.

Commenting on the news, O’Brien, in typical comedic fashion, said: “In 1993 Johnny Carson gave me the best advice of my career: ‘As soon as possible, get to a streaming platform.’

“I’m thrilled that I get to continue doing whatever the hell it is I do on HBO Max, and I look forward to a free subscription.”

“We’re incredibly proud of the groundbreaking work that Conan and his team have accomplished during the 10 years at TBS and are so glad that we will continue to have his presence on our air with the ‘Conan Without Borders’ specials.  We celebrate his success and are glad to see it grow across our WarnerMedia family.”

Casey Bloys, Chief Content Officer at HBO and HBO Max, said: “Conan’s unique brand of energetic, relatable, and at times, absurdist, comedy has charmed late-night audiences for nearly three decades. We can’t wait to see what he and the rest of Team Coco will dream up for this brand new, variety format each week.”

After writing for both Saturday Night Live and The Simpsons, O’Brien debuted as host of ‘Late Night with Conan O’Brien on NBC in 1993. The show ran until 2009, at which time O’Brien took over for Jay Leno as host of NBC’s ‘The Tonight Show.’

In January 2010, less than a year after debuting as host of ‘The Tonight Show,’ O’Brien agreed to a $45 million deal with NBC to exit as host. He said at the time: “Every comedian, every comedian dreams of hosting The Tonight Show and—for seven months—I got to do it. I did it my way, with people I love, and I do not regret a second [of it]….

“All I ask is one thing, and I’m asking this particularly of young people that watch: Please do not be cynical. I hate cynicism; for the record it’s my least favorite quality. It doesn’t lead anywhere. Nobody in life gets exactly what they thought they were going to get. But if you work really hard and you’re kind, amazing things will happen.”