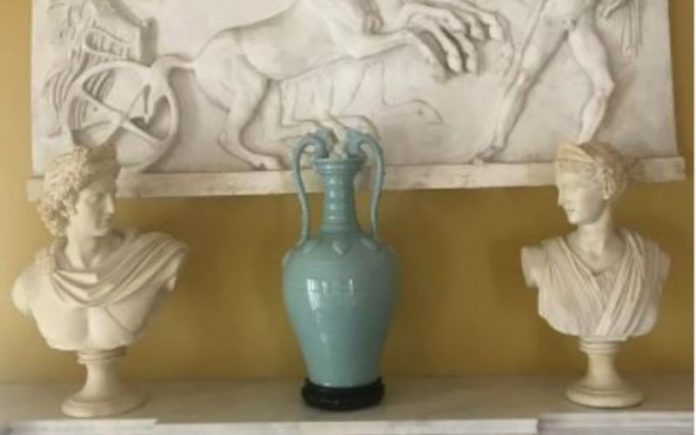 A Chinese vase has sold for €1.2 million ($1.44 million) at an Irish auction, setting a new record for the most expensive art object ever sold at a public auction in Ireland.

The final price for the 300-year-old, 54cm celadon vase was 1,000 times more than its listed price at an auction on Friday, and auctioneer Philip Sheppard said that the sale set a new record for an art object sold at public auction.

Bidding amazingly started at just €500 and was expected to rise to somewhere between €800 and €1,200 at the online auction hosted by Sheppard’s Irish Auction House.

However, over the course of a few minutes, two bidders competing against one another managed to drive the final selling price north of €1 million to the astonishment of the anonymous seller.

Sheppard said that the starting price was intentionally low and that the auction house and the seller knew that the vase was likely to fetch far more at the auction given that it dates back to 18th-century Chinese ruler Yongzheng, the fifth emperor of the Qing dynasty, .

Nonetheless, Sheppard said that the vendor was “speechless” when informed of the final price.

Speaking on behalf of Sheppard’s Irish Auction House, he said that they were “thrilled” to have played a part in creating history.

“We are thrilled to have created a new Irish record,” he told RTÉ News.

“To do so with a live online sale at this value level and in such a resoundingly successful manner is a tribute to the professionalism of the team at Sheppard’s, most of whom are working from home.”

The vase was eventually sold to a Taiwan-based collector, who will have to pay the standard buyer’s premium of 25% (€300,000) on top of the €1.2 million auction price.