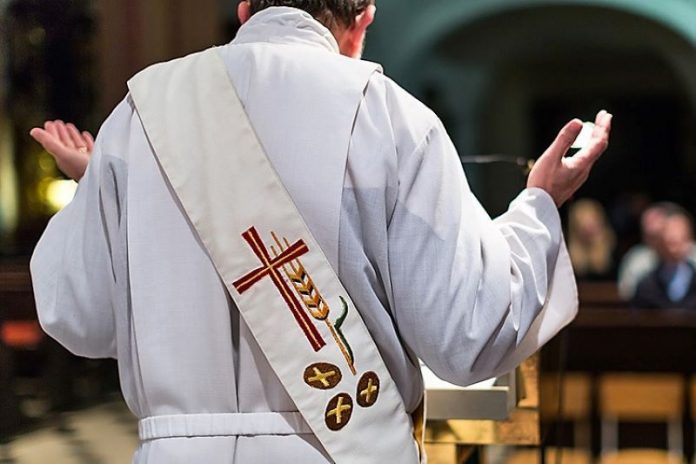 Father PJ Hughes says he would tell the Irish government to “stick your nose out and mind your own business.”

On Tuesday, December 1, the Republic of Ireland exited its Level 5 coronavirus restrictions and re-entered the comparatively relaxed Level 3 restrictions which permit places of worship to open for services with a maximum of 50 people.

Father PJ Hughes celebrated Mass on December 1 at his Our Lady of Lourdes in Mullahoran, Co Cavan, the same day he was quoted in The Irish Times as saying that he will not be “dictated to by a pagan and communist government” about how many people can attend Christmas ceremonies in his church.

“Who the hell do they think they are giving us permission to have 50 people in?,” Father Hughes told The Irish Times.

“They should mind their own business and let us live our lives and let the people be responsible for their own health.”

Last month, Fr Hughes made news when he was visited by gardai for celebrating mass in breach of Level 5 restrictions that dictated that all religious services be moved online. He said that he told the gardaí that he wasn’t aware that there was “a law against people practicing their religion” and that it was protected under the constitution.

Speaking on The Joe Finnegan Show on Shannonside radio on December 1, Father Hughes said that “maybe 16 or 17” attended his Mass earlier that morning.

“They were just happy to be back, that’s all,” Father Hughes said, adding that he told his parishioners: “Christmas is about celebrating the wonder of the incarnation and the birth of Christ, our Savior. We’ll use these few weeks now to grasp better understanding about this simple feast that we celebrate but at the same time celebrating the most important person that was ever born.”

Host Joe Finnegan asked Fr Hughes why he wasn’t “impressed” with Taoiseach Micheál Martin’s address last Friday: “Let’s call a spade a spade. Look around you, sport is going on as if nothing was happening and the shops are open all the time, more people go through the shop doors than at church.

“I don’t know what the government has against the Church. They’re trying to micromanage the country but a special emphasis on the Church.

He later added: “The problem is – the Church has a role, faith has a role, the Lord has a role in our life – why are these people intent on watching us and our every move, and punishing us?

“It’s just time to leave us alone, just trust the Church to do what they’re asked to do. We know the regulations and we’re living by the regulations. But to say, 50 people into a church that can hold 500? Come on, give us a break.

“What am I going to do with a family of five? Am I going to say, ‘well that’s five people, so only 45 more people can come in’?”

He continued: “Every parish will have a meeting with the pastoral council and they will decide, but I would just say to the government, stick your nose out and mind your own business.

“We’re treating him the very same as the people treated Mary and Joseph in Bethlehem at the time of his birth.”

When asked about The Irish Times article and whether or not he actually believes that the Irish government is pagan, the Co Cavan priest said: “It’s bordering on a pagan government, yes it is. Anybody that relegates Christ to not necessary, as not a necessary exercise, or insult the faith of the people, is bordering on pagan.”

When asked if the Taoiseach is a pagan, Fr Hughes said: “His attitude towards the Christian church is very, very poor in the last three weeks. He has closed the Church and ordered people not to go and he has sent the guards out to arrest me. For me now, that is something wrong there.

“What on Earth is wrong with going into the church? People have been told this before – there is no risk as far as I’m concerned, very low risk in the church.

“If people don’t want to go there, they can choose to stay at home. But why stop? It came from the top by the way – it came the Taoiseach and the government – they stopped people from going to church, being present at the Mass.

“That’s my stance on it. I have no right to judge people, but sometimes it’s just upsetting to see how Christ is treated and somebody has to stand up for him.”

Fr Hughes went on to say that “you can not mix faith with science” and urged Bishops to take more action. “They [the Bishops] have to stand up and they have to bang the table in front of the Taoiseach and say, ‘you cannot do what you’re doing to us, you cannot treat us like this, you cannot treat Christ’s Church like this. I’m sorry, you cannot. That’s it.’”

Father Hughes said that the pastoral council, of which he is a member, will have to discuss how to approach Christmas celebrations.