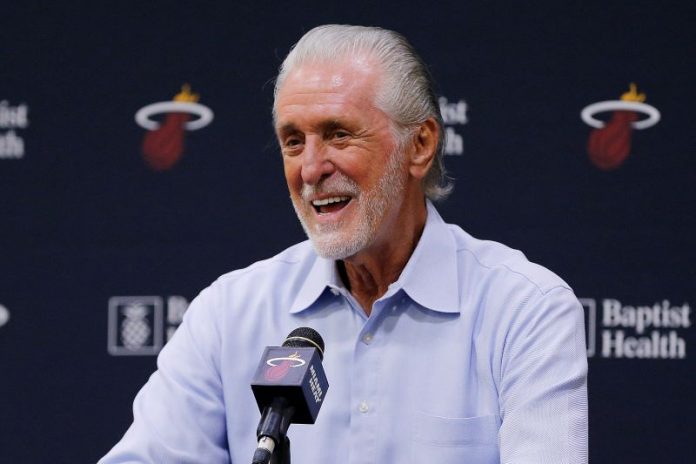 Pat Riley, the president of the Miami Heat, is considered among the Top 10 NBA coaches of all time.

*Editor’s Note: This column was submitted to IrishCentral by Samuel Kingston, a freelance TV producer, writer, and local historian from Clonakilty in West Cork.

With the NBA finals underway, this year sees a unique pairing play in a unique location. The Los Angeles Lakers and Miami Heat take to the court in the Florida Bubble for their first-ever Finals matchup.

While it might be their first time facing each other for the championship, much of the talk is centered around current Laker and superstar LeBron James facing off against one of his old teams, but perhaps an even more important connection between the teams is Irish American Pat Riley.

Riley has an incredible basketball pedigree. In each of the last six decades, Riley has gone to the NBA Finals: in the 1970s as a player with the LA Lakers winning team in 1972; in the 1980s as head coach of the “Showtime” Lakers when his team won four championships; in the 1990s with the New York Knicks when they lost in 1994; in the 2000s as coach with the Miami Heat who won their first-ever championship in 2006; in the 2010s as president of the Heat when they won back to back championships with a team that included LeBron James; and now in 2020, he’s back in the Finals again.

Patrick James Riley was born on March 20, 1945, in upstate New York; his great grandparents had left Co Cavan to work on the Erie Canal.

The Rileys have sports in the blood. Pat’s father Leon Riley was a professional baseball player in the Minor Leagues, and Pat’s brother Lee made it to the NFL for a number of years. Pat himself excelled in baseball, American football, and basketball. A high school sports star, he would go on to become a basketball and football star at the University of Kentucky.

In 1967, Riley was selected to the NBA  as a first-round pick by the San Diego Rockets, as well as to the NFL by the Dallas Cowboys in the eleventh round. A career on the court, however, held more promise than a career on the gridiron.

In 1972, he won his only championship as a player as part of the LA Lakers. After a stint with the Phoenix Suns, he retired in 1976.

After his retirement from playing, Riley returned to the Lakers organisation, first as a TV game analyst. He later became an assistant coach to Paul Westhead in 1979/80.

While the Lakers would go on to a win a championship that season, giving Riley his first coaches ring, tensions between Westhead and key player “Magic” Johnson saw Westhead get the chop. After some confusion between Lakers owner Jerry Buss and Lakers legend Jerry West, Riley was appointed as head coach.

Keen to win a championship as head coach, Riley brought the Lakers game to the next level. Buss and the Lakers fans wanted a high tempo running game to bring in the fans and Riley helped deliver that on court. While Westhead had implemented the Showtime style in his first season, he changed tactics in the second season. Riley brought back the quick offence and introduce his own ideas.

It was entertaining, exciting and the LA fans loved it. Lakers games started to attract celebrities and games became hot ticket events. On the sideline was Riley with his perfect slicked hair and his tailored Armani suits. He became something of a celebrity himself. Riley and the Lakers perfectly captured the razmataz of Hollywood.

Riley won his first championship as head coach in 1982 when the Lakers defeated the Philadelphia 76ers. The following season, the 76ers exacted revenge by sweeping the Lakers in the Finals. The next year would see an old rivalry reignite the NBA.

This year, the Lakers and the Heat are competing to win the Larry O’Brien Trophy, named after the Commissioner of the League from 1975 to 1984. O’Brien, the son of Irish immigrants, took over as commissioner from J Walter Kennedy. Kennedy’s tenure saw the league increase from nine teams to 18 teams, regain a TV contract, and increase attendance.

As Commissioner, one of O’Brien’s earliest hurdles was the merger with the American Basketball Association. The merger caused a number of PR issues, there were issues with drugs and fans began turning away from the game. When fans turn away, TV turns away as well, and basketball looked to be on a downward spiral.

Yet during his tenure, basketball staged a dramatic revival. Many argue that this was not thanks to O’Brien, but it was the work of subordinates such as David Stern, who became the following commissioner. They, and not O’Brien, were the key to the upsurge that helped to bring fans back and with that saw new TV contracts and increased media exposure. Yet there is no denying that by the time O’Brien left the NBA in 1984, the sport’s future was looking bright.

The Lakers – coached by Riley – appeared in the first Larry O’Brien Trophy Final in 1984. They ultimately lost an epic contest to their eternal enemies the Boston Celtics, a rivalry that goes back to the early days of the NBA. The Lakers had a dynasty team in the 1950s when they were based in Minneapolis. The Celtics emerged in the late ’50s and ’60s and won eight titles in a row, creating their own dynasty.

While the Lakers and Celtics have one of the oldest rivalries in basketball, the rivalry was one-sided. The Lakers had never beaten the Celtics in a Final, losing on seven previous occasions before 1984.

The 1984 series was the first to pit Magic Johnson against Larry Bird on the NBA stage. Their college rivalry had been legendary and that helped draw in massive crowds both in the stands and on television. The series with the re-emerging Celtics v Lakers rivalry mixed with the Magic v Bird rivalry was seen as the start of the NBA’s rebirth which then continued through Michael Jordan in the 1990s that took the NBA to a global level. The following year, in 1985, the Celtics and Lakers had a rematch.

Under Riley, the Lakers were determined to overcome the Celtics curse. They were sick of Lucky the Leprechaun on the Boston Garden centre court and the baying Boston fans that surrounded the court. The Lakers were keen to shut them up, and that’s just what they did.

After Game 1, it didn’t look too good with the Lakers suffering a defeat dubbed “The Memorial Day Massacre.” Kareem Abdul-Jabbar, a Laker legend, was slated in the press for his poor performance. However, he turned that around to become the Finals MVP as the Lakers finally defeated the Celtics by 4 games to 2.

They won again in 1987 against Boston and in 1988 against Detroit. Riley now had four championship rings as head coach in just six years.

In 1989, they lost to the Detroit Pistons, coached by Chuck Daly, a fellow Irish American from Pennsylvania. Daly coached the Detroit Pistons to back-to-back titles in 1989 and 1990, ending the Celtics dominance in the East and disrupting the League with their “Bad Boys” approach to basketball. Among the key players were Isiah Thomas, Bill Laimbeer, and a still-developing Dennis Rodman who saw Daly as a father figure.

Daly went on to coach the superstar US Dream Team at the 1992 Barcelona Olympics as they cruised to the gold medal. In Daly’s honour, the NBA awards to outstanding coaches the Chuck Daly Lifetime Achievement Award. Pat Riley received the award in 2012.

After his time at the Lakers, Riley coached the New York Knicks. Always a franchise that had underachieved, Riley was able to get the best out of the team, and in 1994, they reached the NBA Finals. It was an exciting time in New York, the Rangers had just won the NHL’s Stanley Cup – could the Knicks complete a Madison Square Garden double? Unfortunately not as the Houston Rockets led by Hakeem Olajuwon denied them. Riley would soon find himself travelling south to the warmer climes of Miami.

Riley arrived in Miami in 1995 and he was given the keys to the kingdom – he had complete control over basketball operations. He helped turn a relatively new franchise into regular playoff contenders. After much rebuilding, the championship was won in 2006, backboned by Dwayne Wade and Shaquille O’Neal.

Riley was coach when the Heat celebrated their first victory, yet there is some controversy around this success. Riley had stepped aside as coach in 2003 but many argue that when he realised the Heat were in a position to win the championship, he sought to get his replacement Stan Van Gundy fired. Van Gundy did resign, and Riley came back into the coaching fold to lead the team to glory.

In 2008, Riley stepped down as coach again to focus on his role as president and lead another rebuild of the team. Joining Dwayne Wade was LeBron James and Chris Bosh, who became known as “The Big Three.” All three were strong performers and they brought more glory to Miami winning the championship in 2012 against Oklahoma City Thunder and the following year against San Antonio Spurs, giving Riley his first rings as an executive.

The Miami Heat are something of a surprise package this season with many saying their success is down to Riley’s dealings off the court in building a strong competitive team. In particular, players such as Jimmy Butler and rookie Tyler Herro who have stepped up to the mark in the Bubble. Can they lead Miami to victory and get another championship for Riley? Or will the famous purple and gold of Riley’s old team triumph? We’ll have to see.

*Samuel Kingston is a freelance TV producer, writer, and local historian from Clonakilty, West Cork. He is currently writing a book – “The Sporting Irish” – which tells the story of the Irish impact on sports around the world.  You can follow him on Twitter @samkingclon.