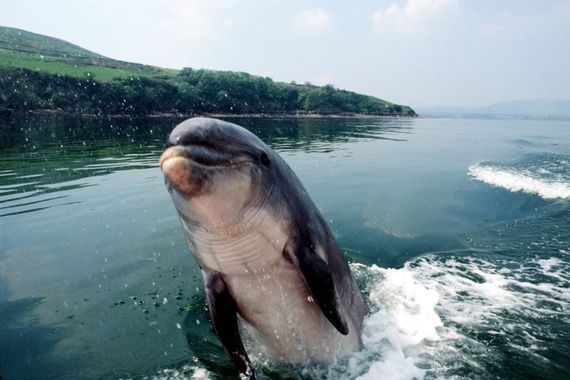 THE greatest human and dolphin story ever told appears to have come to its inevitable demise in Dingle, Co. Kerry.

Fungie, maybe the most beloved mammal in Irish history, appears to have left us for the deep.  Since 1983 the bottle-nosed dolphin made his home in the waters of the cool Atlantic off Kerry and became a worldwide celebrity.  About a week ago he disappeared.

When he first appeared in 1983 he seemed like a godsend.  The Dingle locals nicknamed him Fungie after a young fisherman who first noticed him could scarcely grow a beard.

Word spread quickly about the playful dolphin who followed boats and who leaped mightily in the air, nudged fellow swimmers and at times appeared to be showing off as he raced ahead of boats, leaping and diving to his heart’s content.

Every day Fungie would rush to meet the first boats, a sentinel of the sea, proclaiming all was well in Fungie land.

It was tough times as Ireland came out of one of its periodic financial depressions.  The coastal town of Dingle, remote and difficult to reach on treacherous mountain roads, was feeling the impact more than most.  Tourism, its main industry, was in a slump.

So many went to see him that the skippers of the fishing boats, many of them idle, came up with a plan.

Soon chartered boats full of tourists brought by the numerous stories in the media nosed their way out of Dingle Harbor into the open sea. At its zenith no fewer than 12 boats a day, chock filled with tourists, began day trips just to see Fungie.

Some were so enchanted by the water and the wild mammal that they stayed. Fungie had his own fan club and a plaque of him was placed near the center of town.

Fungieland was Disney Worlds for many. The boats did a roaring trade, and the nearby cafes catered to the tourists.

He rarely disappointed, springing from the water and delighting the many children who had traveled far to meet him, some from distant lands such as Korea and China.

I had the pleasure of taking my daughter and sister’s children to see him. He swam right up alongside our boat and we raced from side to side to get a glimpse of him. It was a wonderful experience.

Fungie became so popular that some Dingle folk will tell you that the crowd across the bay in south Kerry, near Killarney, tried to steal him.

Some even claim he was a clever fake, a prosthetic version like Jaws in the movie. He was real all right, and the day-long squeals of delight of the kids when they saw him do his tricks was a warm sight to see.

There are many beautiful sights and landmarks to be seen near Dingle.  Due west of Dingle is Slea Head drive, a magical tour around some of the most beautiful scenery in the world immortalized in the movie Ryan’s Daughter.

The Blasket Centre, in sight of the Blasket Islands, is a must-visit as it brings to life the timeless way of living on that Kerry island long ago.

But Fungie topped them all, a live dolphin who made his home among humans and won their hearts.

Perhaps he will return.  Perhaps he is merely spending a short while upriver taking a break.

If not Dingle will be broken-hearted. The magnificent sea creature who shared his life with them could be gone forever.  May the sea gods take him to his eternal rest if it is so.