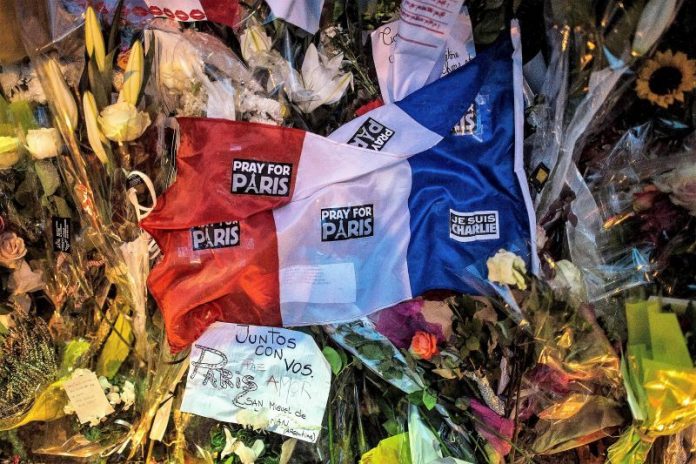 The morning after the horrific terrorist attacks of 13 November 2015, exhausted and insomniac, I was ensconced in a café.

I had been awake all night as when the spate of attacks started; Rebecca, one of my daughters was out in downtown Paris celebrating a friend’s birthday.

The first terrorist attack started at 9:15 pm at the Stade de France in Saint-Denis, a northern suburb of Paris where an international football match was playing.

Another group of terrorists then fired on Paris’s cafés and terraces.

A third group carried out mass shootings and took hostages at a rock concert in the Bataclan Theatre where 1,500 people had gathered to hear the Eagles of Death Metal play.

The 13 November attackers killed 130 people, including 90 at the Bataclan. Another 416 were injured, many seriously. It was the deadliest attack on France since WW2.

My daughter and her friends heard the shooting and found out that people had been gunned down in a neighbouring café and started running to find a safer area. As they ran through the panicked streets of Paris, people were screaming. They ran to the Châtelet subway station but a sea of terrified people were running up the subway stairs towards them shouting “run, run there’s a bomb in the station.” That was untrue, however, trying to navigate the streets of Paris, not knowing where the next attack might happen, as we stayed in constant phone contact with Rebecca, was a scenario deign of a horror film.

All the roads in and out of the city were blocked, therefore we could not get inside the walls of Paris to collect her. She and her friends roamed the streets until, after walking for hours, they finally reached one of her friend’s apartments where they all hunkered down for the night.

I didn’t sleep a wink, and since Rebecca finally had to sleep in the not so early hours of the morning, I knew I wouldn’t see her until the late afternoon and decided to go for a walk. On Saturday 14 November morning, I headed to the Clignacourt flea market to try to put the nightmare scenario, which was being played repeatedly on every TV station, out of my mind for even a few minutes.

I was sitting in the “Paul Bert” restaurant sipping a hot chocolate when a musician spontaneously drifted in with his guitar and trombone. The proprietor said it was so early there wouldn’t be enough clients to pass the hat. However, the musician, who coincidentally was Irish, said that was no problem, he just wanted to help people there through the horror and offer some sort of solace.

Although Paddy Sherlock the musician can set a venue on fire, he toned it down to mellow, and as I sat there, tears slowly plopped into my rich hot chocolate, diluting it. When we chatted after his set, he explained that he had been the resident musician for years at the “The Coolin Irish Bar,” a mythical left bank pub that unfortunately closed in 2015.

Paddy had also done Ireland proud when he played “Dirty Old Town” earlier that year at the official funeral of Stéphane Charbonnier (better known as Charb), the editor in chief who was among the 12 people murdered following the “Charlie Hebdo” massacre in January 2015.

It seemed our musicians were instrumental in nurturing Parisians’ resilience and many residents of the ‘City of Light’ refused to kowtow to a fearful, apartment-bound life in the wake of the January and November 2015 attacks.

I will never forget the night of 13 November 2015 and the morning after. I think about the resilient flea market stall and shop owners who flatly refused to shut that morning and opened to let the flea market live. I also think of Paddy Sherlock, and our resident Paris musicians Marcel Proust’s words come to mind – “Let us be grateful to people who make us happy, they are the charming gardeners who make our souls blossom.”

The attacks of 13 November 2015 were carried out by nine young ISIS attackers, targeting their own peers—and in the process created what came to be known as the “Bataclan Generation,” young French whose adulthood has been forever marked by the tragedy.

The terrorists were native Europeans, some from Belgium, and others from various Parisian neighbourhoods. They targeted the lifestyle of the French youth. “It was an attack on youth culture,” David Fritz Goeppinger commented. He was 23 that night at the Bataclan and was among 10 concertgoers taken hostage for two and a half hours during the assault.

“We are free to drink alcohol, to go to concerts,” he says. “It was a direct attack on young people who could do that.” He recently published a book about the Bataclan attack titled Un Jour dans Notre Vie (Translation: “One Day in our Live.”)

We will never recover from the scar of those terrible attacks. An Irish couple David Nolan and Katie Healy who attended the Bataclan that night survived and have since had a baby girl. They were so lucky. Me too, I got to go home and hug my daughter in my arms. Many did not have that luxury and my heart goes out to the families of the innocent massacred and injured on that horrible night.

In Paris, we are commemorating our 13 November 2015 dead, the loss of so many young lives, and regretting life’s former insouciance, which has never completely come back since, despite the legendary resilience of the French.