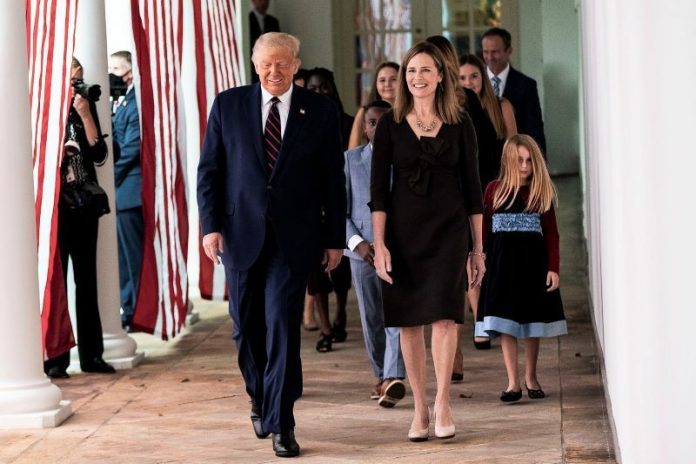 You may love Donald Trump or you may hate him. But you surely remember that in January of 2018 he came up with a certain phrase to describe certain countries whose people were simply not good enough for America.

Trump wondered why we were taking so many immigrants from — to use his poetic phrase — “s***hole countries.”

“Why do we need more Haitians” Trump was quoted as saying by The Washington Post, adding “Take them out.” When given a chance to deny he said such things about Haiti, and various other countries, Trump — God bless him — did not even deny it. He offered up mere gibberish.

The language used by me at the DACA meeting was tough, but this was not the language used. What was really tough was the outlandish proposal made – a big setback for DACA!

I hope someone asks Amy Coney Barrett about this whole episode in the coming weeks.  Barrett is up for the Supreme Court seat left vacant following the death of Ruth Bader Ginsburg. Barrett is a proud and devout Catholic who grew up in New Orleans, educated at schools founded by and for Irish immigrants.

Two of her children are adopted from a country about which Trump used language that was tough but, you know, not the language he used.

In other words, Barrett adopted two kids from the s***ole country of Haiti.

Which makes her far more progressive — not to mention Christian — than many of the liberal folk who want a different kind of woman on the Supreme Court to replace RBG.

And yes, sure you can find quite a bit of hypocrisy in that. But that first requires you to overlook the fact that there was a moment recently when Barrett looked Trump in his eyes, and shook his tiny hands, and chose not to say, “Hello, Mr. President. Before we discuss our shared interest in the meek and needy and other such Christian matters, please meet my two children who were born in a s***hole country.”

Let’s be clear on this: I respect Amy Coney Barrett’s religious and intellectual beliefs. But she is also in the process of selling her soul to a man who has more or less said two of her children are not made of the stuff that makes good, quality Americans.

You’re going to hear a lot in the coming weeks about how senators Diane Feinstein, and even Joe Biden’s vice presidential pick Kamala Harris, have said some nasty things about devoutly Catholic judges. And those are fair criticisms.

But are any Republicans going to point out that Trump himself said something far worse about his own nominee’s children?

And Barrett’s own silence on this matter is a grave mark against her, especially if she is going to try to come off as some kind of victim of Democratic anti-Catholicism.

Such a charge might carry a bit more heft if she were willing to call out the very man nominating her for a seat on the Supreme Court.

Which is not to say Democrats and liberals don’t have their own problems on this issue. They will claim they are shocked — shocked — at Donald Trump and his minions, who have all sorts of nasty things to say about Muslims and other religious minorities. And yet, look at what Barrett and those kooky Catholics at their Handmaid’s Tale cult are doing?

Well, actually, they are adopting kids from s***hole countries and trying to give them a chance to live a better life in America.

But, hey! Amy and Donald! Guess what? That’s why the Irish immigrant nuns in New Orleans set up the very schools Barrett attended. To give the world’s downtrodden a chance at a better life.

Donald, how do you feel about doing that today?

Amy, how do you really feel about Mr. S***hole Donald?

Kamala, should we only respect some religions or all religions?

When you look at all this, and the mess that is surely coming in the next few weeks, I’m starting to think I know which is turning into the real s***hole country.