#7 St. Peter’s Road was perhaps the most important Dublin address for James Joyce.

I was going down St. Peter’s Road—in Joyce’s time it was called St. Peter’s Terrace—with my first cousin Brendan Bartley a few years ago when he pointed out the plaque on #7 which read: “The Family Home of James Joyce, author of Ulysses, 1902-1904.”

The historical moment elicited a laugh from me: “If old man Joyce had paid the rent more, there would be a lot fewer plaques around Dublin,” I observed.

I was reminded of how Joyce knew the neighborhoods of Phibsboro, Cabra, and Glasnevin so well when it was brought to my attention that the Phibsboro Library, located at Blacquiere Bridge, North Circular Road, was planning a special Bloomsday celebration of its own on Sunday, June 16th. They are promising “A lively afternoon of readings, dance, music, and laughter in the garden of Phibsboro Library on Bloomsday June 2019. There will be a preview of Phibsboro Tidy Town Sustainable Day in September with a focus on James Joyce as the great recycler of language, ideas, and products (e.g.: food, paper, and even coffins!) and how we can all follow his example.”

Little did Mr. Joyce realize how he had combatted his carbon imprint more than a century before it became popular!

John Joyce’s terrible finances kept his family moving. There’s a wonderful book called ‘Where They Lived in Dublin’ by John Cowell which covers the address of every famous Dubliner you can name from Joyce to Michael Collins to Barry Fitzgerald.

The Joyce listing is extraordinary—because of the length:

Of all these addresses, #7 St. Peter’s Terrace perhaps has the most historic significance since this is the house where Joyce’s mother, May, died—an event that would haunt Joyce the rest of his life. Richard Ellmann in his extraordinary biography of Joyce documents these issues at this address which rests under the shadow of the spire of St. Peter’s RC Church just yards away.

“May Joyce died on August 13, 1903, at the early age of forty-four,” Ellmann wrote in his Joyce biography. “In her last hours she lay in a coma, and the family knelt about her bed, praying and lamenting.”

Ellmann then goes on to describe a supernatural event. “James and Margaret got up at midnight to see their mother’s ghost, and Margaret thought she saw her in the brown habit in which she was buried. The whole family was dismayed and sad, but especially Mabel, the youngest, not yet ten years old. James sat beside her on the stairs, his arm around her, saying, ‘You must not cry like that because there is no reason to cry. Mother is in heaven. She is far happier now than she has ever been on earth, but if she sees you crying it will spoil her happiness. You must remember that when you feel like crying. You can pray for her if you wish, Mother would like that. But don’t cry anymore.’” So much for the anti-clerical Joyce in a time of family crisis.

Even after May Joyce’s death, the finances continue to spiral out of control. “To keep one’s equilibrium in 7 St. Peter’s Terrace,” wrote Ellmann, “required all possible dexterity. The disarray that had marked the Joyce household since their move from Blackrock to Dublin a dozen years before, changed to near-chaos after May Joyce’s death. The house was in disrepair, the banister broken, the furniture mostly pawned or sold; a few scrawny chickens scrabbled at the back for food. John Joyce took out another mortgage for £65 on November 3, 1903, and knew that this would be the last and that nothing was left of the nine hundred pounds he had obtained a year before by commuting his pension. The house was to drop away from him in 1905. When the new mortgage money moved from his hands to those of the Dublin publicans, he sold the piano, a desperate act for a musical man and one which roused James to fury when he came home to discover it.”

By 1904 Joyce was out of St. Peter’s Terrace and living mostly on the south side of Dublin bay, most famously at Oliver St. John Gogarty’s Martello Tower in Sandycove. In Ulysses Gogarty would morph into Buck Mulligan and the tower would serve as a backdrop in the opening pages of the great novel. That summer Joyce would meet Nora Barnacle (“She’ll stick to you,” remarked John Joyce) and by the fall they were in exile from Joyce’s beloved Dublin.

Joyce wrote about his self-inflicted exile in ‘A Portrait of the Artist as a Young Man:’ “I will tell you what I will do and what I will not do. I will not serve that in which I no longer believe, whether it calls itself my home, my fatherland, or my church: and I will try to express myself in some mode of life or art as freely as I can and as wholly as I can, using for my defense the only arms I allow myself to use—silence, exile, and cunning.”

Joyce had divorced his beloved Dublin. He would return briefly in 1909 when he helped set up one of Dublin’s first cinemas, the Volta in St. Mary’s Street. (The building is still there and marked by another Joyce plaque.) He would also return again in 1912 for one last time.

The plaque at Volta Cinema in Dublin

But, of course, Joyce did not forget his love affair with Dublin. He would only write about his hometown in all his works, most famously in Ulysses. And he would remember the neighborhoods that surround #7 St. Peter’s Terrace. These would be celebrated in Paddy Dignam’s funeral in Glasnevin and his comments on Hedigan’s Brian Boru pub, just a stone’s throw from Glasnevin.

Dublin, too, would kiss and make-up with Joyce. He now has his own bridge across the Liffey named after him and his statue opposite the GPO at the corner of North Earl Street is popular with tourists who love being photographed with it. 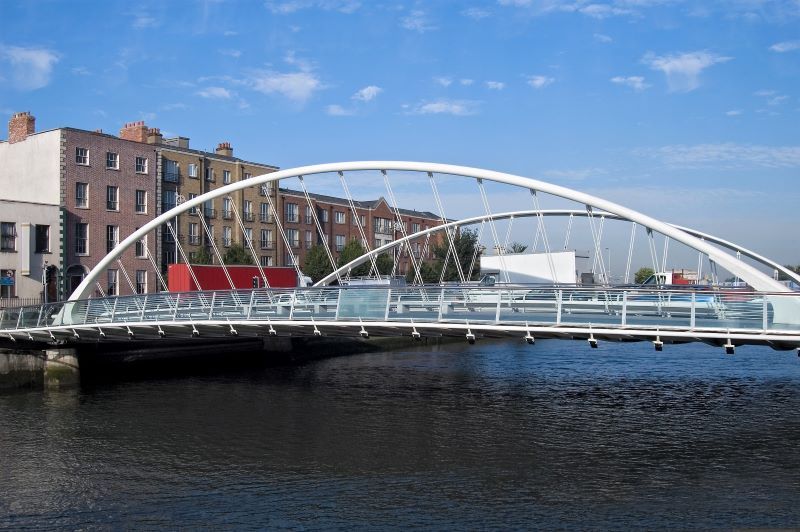 Of course, the greatest tribute to Joyce is around Bloomsday when Dublin comes alive with celebration all over the city, from the Joyce Tower to the James Joyce Centre on North Georges Street, to Davy Byrnes Pub on Duke Street. Of course, if you’re up by St. Peter’s Road you may want to go by #7. Perhaps May Joyce’s ghost is once again on duty, this time happy that Dublin is remembering its Prodigal Son, her son, James Joyce.

*Dermot McEvoy is the author of ‘The 13th Apostle: A Novel of Michael Collins and the Irish Uprising’ and ‘Our Lady of Greenwich Village,’ both now available in paperback, Kindle and Audio from Skyhorse Publishing. He may be reached at dermotmcevoy50@gmail.com. Follow him on his website or Facebook.